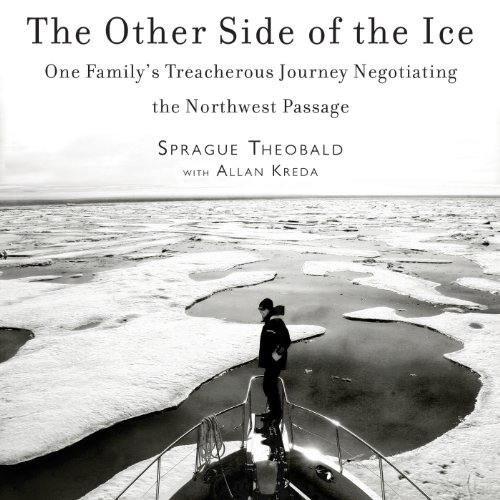 The Other Side of the Ice

Sprague Theobald narrates his own story about his attempt to sail the treacherous Northwest Passage with his family, and his low-key performance belies the anxiety and danger of his journey. Much of Theobald's story is concerned with the relationships between the crew as they struggle to overcome their bad history with each other and work together to survive the unrelenting cold, polar bears, and icebergs that threaten to crush them. As Theobald narrates these harrowing events, remnants of despair and self-doubt creep into his voice, and it is difficult to turn one's ear away. Listeners will find themselves rooting not just for the crew's survival at sea, but for their survival as a family as well.

A sailor and his family's harrowing and inspiring story of their attempt to sail the treacherous Northwest Passage.

Sprague Theobald, an award-winning documentary filmmaker and expert sailor with over 40,000 offshore miles under his belt, always considered the Northwest Passage - the sea route connecting the Atlantic to the Pacific - the ultimate uncharted territory. Since Roald Amundsen completed the first successful crossing of the fabled Northwest Passage in 1906, only 24 pleasure craft have followed in his wake. Many more people have gone into space than have traversed the Passage, and a staggering number have died trying. From his home port of Newport, Rhode Island, through the Passage and around Alaska to Seattle, it would be an 8,500-mile trek filled with constant danger from ice, polar bears, and severe weather.

What Theobald couldn't have known was just how life-changing his journey through the Passage would be. Reuniting his children and stepchildren after a bad divorce more than 15 years earlier, the family embarks with unanswered questions, untold hurts, and unspoken mistrusts hanging over their heads. Unrelenting cold, hungry polar bears, and a haunting landscape littered with sobering artifacts from the tragic Franklin Expedition of 1845, as well as personality clashes that threaten to tear the crew apart, make The Other Side of the Ice a harrowing story of survival, adventure, and, ultimately, redemption.

What listeners say about The Other Side of the Ice

Lots of angst. Short on story.

Lots of repetition about personal feelings and interactions. Story takes a back seat. Only finished because an audiobook.