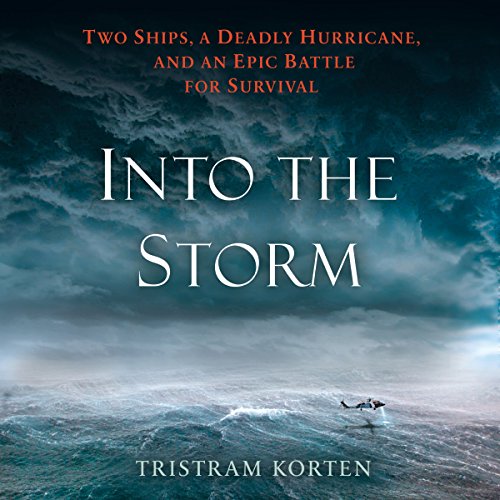 By: Tristram Korten
Narrated by: Dan Woren
Try for £0.00

“An intense, immersive deep dive into a wild, dangerous, and unknown world, written with the pace and appeal of a great thriller. This is nonfiction at its very best.” (Lee Child, New York Times best-selling author of the Jack Reacher novels)

In late September 2015, Hurricane Joaquin swept past the Bahamas and swallowed a pair of cargo vessels in its destructive path: El Faro, a 790-foot American behemoth with a crew of 33, and the Minouche, a 230-foot freighter with a dozen sailors aboard. From the parallel stories of these ships and their final journeys, Tristram Korten weaves a remarkable tale of two veteran sea captains from very different worlds, the harrowing ordeals of their desperate crews, and the Coast Guard’s extraordinary battle against a storm that defied prediction.

When the Coast Guard received word from Captain Renelo Gelera that the Minouche was taking on water on the night of October 1, the servicemen on duty helicoptered through Joaquin to the sinking ship. Rescue swimmer Ben Cournia dropped into the sea - in the middle of a raging tropical cyclone, in the dark - and churned through the monstrous swells, loading survivors into a rescue basket dangling from the helicopter as its pilot struggled against the tempest. With pulsating narrative skill in the tradition of Sebastian Junger and Jon Krakauer, Korten recounts the heroic efforts by Cournia and his fellow guardsmen to haul the Minouche's crew to safety.

Tragically, things would not go as well for Captain Michael Davidson and El Faro. Despite exhaustive searching by her would-be rescuers, the loss of the vessel became the largest US maritime disaster in decades. As Korten narrates the ships’ fates, with insights drawn from insider access to crew members, Coast Guard teams, and their families, he delivers a moving and propulsive story of men in peril, the international brotherhood of mariners, and the breathtaking power of nature.

“The story [Tristram] Korten tells is impressively multifaceted, exploring everything from timely issues such as climate change to timeless themes such as man’s struggle against the ocean’s fury.” (Miami New Times)

“Into the Storm is a triumph of reporting and you-are-there writing that becomes a deeper tale - with more implications about our own lives - with every chapter.” (Robert Kurson, New York Times best-selling author of Shadow Divers)

“An incredible story and first-rate adventure...Tristram Korten delivers us into a thrilling and dangerous world, strapping us in beside everyday heroes who confront forces of nature even Hollywood can’t re-create. Into the Storm is a triumph of reporting and you-are-there writing that becomes a deeper tale - with more implications about our own lives - with every chapter.” (Robert Kurson, New York Times best-selling author of Shadow Divers)

“A terrifying but also inspiring story of disaster and resilience on the high seas. This is as close as I ever need to get to being aboard a ship in a hurricane. Riveting stuff.” (Josh Dean, author of The Taking of K-129)

What listeners say about Into the Storm

I particularly liked the back stories, lots of information about why and what led to the disaster lends understanding to the story.

It was factual, respectful and kept my interest.

Why the heck would you take an average book and preach a blatantly biased global warming sermon at the end?

This was a great book! I learned a lot and loved the history. Loved learning about how rescue swimmers train and how the crew handled the situations!

Accounting of a Nautical Disaster


This was an interesting account of one of the worst seafaring disasters in history. It recounts the rare hurricane Joaquin's unusual path that caused the destruction of two ships. One crew survived and one did not. Author Korten recounts the heroic Coast Guard rescue attempts for both and contrasts the different approaches to handling the emergency that the two ship captains took. The conditions of the vessels and various seafaring procedures that didn't fully protect the safety of the crew are also examined. I read this book using immersion reading while listening to the audiobook. Narrator Dan Woren does an ok job with narration that is a bit rote. An interesting read.

extraordinarily thorough and interesting. this tragedy at sea has perplexed and saddened me. i needed to know more.

This story kept me on edge the whole time. I never wanted to stop listening. It’s very emotional, but very well written. The narrator, Dan Woren, did a fantastic job of drawing you into the story and keeping you interested.

I found out I hate the environment.

The performance is excellent and the author does an excellent job of telling the story until the end where he takes a political turn and explains that the Republican Party is destroying the environment. Don’t fear though, this is backed by many peer reviewed studies. It’s implied that if you care about the environment even a little or if you never want another hurricane to happen, you should vote for Democrats. The entire political section should have been removed by an editor because it had nothing to do with the overall story arc. Overall, the book was good. It was very well researched and put together, except for the one section. I wish that the author and others with the same beliefs about the environment realized that a lot of Republicans do care about the environment and want to make changes. We just don’t cave to climate alarmists which seem to be the ones leading the discussion about the topic. Then again, they’re probably just the ones talking the loudest. Glad I gave it a listen, but I won’t purchase another from this author.

A Great Accounting of a Tragedy

I enjoyed Into the Storm. It was a great accounting of a tragedy we all heard about but never got the conclusion as the media shifted its fickle eye away before any was drawn. It doesn’t have the intensity of A Perfect Storm, probably because Korten used less poetic justice than Junger and reported more closely to the facts and without injecting too much supposition. Nevertheless, his research was thorough and deep, and his writing doesn’t disappoint.

While this tragedy could have been avoided by the actions of the Captain, it is obvious that the corporation behind the broken vessel—and lack of training or up to date instruments—was at the bottom, human error. Human error in the worst possible way. The plea by the Captains wife was heartfelt but untrue. For, if the man she described was on the job, this would not have happened. He was driven by ego, selfish purpose, and carelessness. Mutiny should have saved this ship.