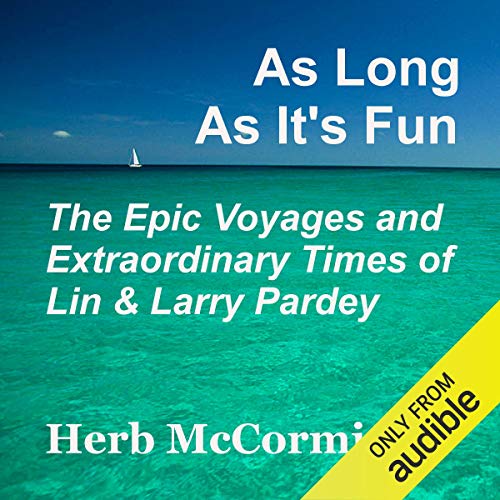 As Long as It's Fun, the Epic Voyages and Extraordinary Times of Lin and Larry Pardey

By: Herb McCormick
Narrated by: Russell Stamets
Try for £0.00

To anyone interested in small-boat cruising and voyaging, the names Lin and Larry Pardey need no introduction. As world-girdling sailors who roamed the planet on a pair of small, engineless boats that they built themselves, the Pardeys established their hard-earned reputations by eloquently (and sometimes controversially) telling their stories through a series of best-selling books and manuals, and countless seminars and boat shows.

They have been called the first couple of cruising and have remained true to their mantra: Go simple, go small, go now. And after 200,000 miles of cruising under sail, they ve demonstrated that the dream of voyaging over the horizon is not only attainable, it s affordable. The children of modest, middle-class families, their message of accessibility into the world of cruising of taking your own floating home anywhere has proved irresistible to tens of thousands of sailors. Lin and Larry Pardey became cruising royalty not solely due to their impressive deeds but also through their rare ability to share what they'd learned across multiple media. Seemingly every offshore cruiser knows who they are and what they represent. Or do they?

In As Long as It's Fun, the biography of Lin and Larry Pardey, Herb McCormick recounts their remarkable sailing career from their early days in Southern California to their two circumnavigations to their current life in a quiet cove in New Zealand. Through interviews with their families, friends, and critics, McCormick delves deeply into the couple's often-controversial opinions, sometimes-tenuous marriage, and amazing list of accomplishments. As Long as It's Fun is as much a love story as it is a sea yarn, and, like all such stories, it s not without complications...which makes it not only a sailing tale but also a human one.

What listeners say about As Long as It's Fun, the Epic Voyages and Extraordinary Times of Lin and Larry Pardey

I really enjoyed listening to this biography of sailings 'first couple'. Some inspirational thinking and many great adventures along the way. Highly recommended.

Long may it sail

I don't usually read/ listen to biographies, I tend to like autobiographies but this is a very entertaining story.
It really does a good job of letting you see inside the life and relationships of Lynn and Larry, and what a life they've had.
One day I'm going to head off to sea and when I do I hope its as interesting and fulfilling a time as they had.

What made the experience of listening to As Long as It's Fun, the Epic Voyages and Extraordinary Times of Lin and Larry Pardey the most enjoyable?

The narrator has a natural talent - great delivery. And the storytelling from the writer is first-rate.

The sections describing their earliest voyages.

I've long been a fan of the Pardeys. I've read all of their books, and thus was familiar with aspects of this biography before I experienced the biography. Herb McCormick brought new insights and a fresh perspective. Excellent overall.

A fascinating memoir of an authentic life

I was interested in this book through the entirety of the presentation. The part about the Hiscocks was extremely touching and inspiring. This is a great book for listening to at work.

Lin and Larry Pardey have lived a life worth reading, and Herb McCormick tells is splendidly. Really enjoyed this.

Great stories were worth the insufferably poor pronunciations. Boring affect. Great read. Worth the price of entry.

A well made biography of a couple dear to the sailing community. My only caveat is the need to speed the narration up 10% to comfortably listen.

Wonderful story. Thoroughly enjoyed it beginning to end. Well narrated also! Hats off to the Pardeys...makes me wish Ihad mine to do all over!

Read this if you've ever wanted to sail.

Perhaps the most intriguing story on sailing I've read. The Pardey's did everything with vigor and enthusiasm. Their story keeps you always wanting to hear the next chapter, yet delivers the best satisfaction next to being on the open water yourself.

The stories could have been interlaced a bit better given the years covered. I made my self pay attention instead of the reader keeping my attention. It helped to listen and follow the voyages on google maps. Inspirational to a few of us seeking to sail far.

This is about a couple’s life with lots of details of their income and endeavors, but very little of sailing adventures. I found myself skipping through chapters and finally giving up not finishing it. Extremely boring.

This book should be recommended as an introduction to the library of Pardey authored books, rather than a good standalone work. It outlines with far too little detail the globe trotting lifestyle of the couple, never giving enough detail as to all that happened or why. It reads more like an old Readers Digest condensed book, enumerating events without detail. It does, though, make one want to dig into the Pardey books to get the details of their adventures that this one is lacking.

What other book might you compare As Long as It's Fun, the Epic Voyages and Extraordinary Times of Lin and Larry Pardey to and why?

I'd compare it to Josh Slocum's books, to Two Years Before the Mast or to More Backward Faster.

I felt his delivery was a bit thin, flat and I felt he mispronounced quite a few words.

Did As Long as It's Fun, the Epic Voyages and Extraordinary Times of Lin and Larry Pardey inspire you to do anything?

This book did inspire me to search out the Pardey authored books, search for the Hiscock books about their adventures and look for more information about many of the characters named in this book.