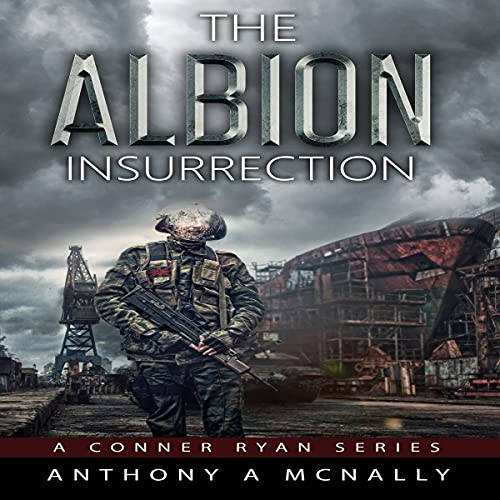 By: Anthony McNally
Narrated by: Simon Williams
Try for £0.00

When the most powerful man on earth wants you dead, you have got a bit of a problem.

Ex-SAS soldier Conner Ryan’s constant merry-go-round of mayhem takes another cataclysmic murderous spin. The powerful paranoid face of Jerome Eugene Armstrong, the president of the United States and leader of the worlds. One superpower wants to wipe the board clean of any blood trails that could lead back to the White House. Ryan is marked for bleaching by underworld criminals after serving his purpose in the assassination of the head of Britain’s MI5 Sir Winston Didcot.

Ryan is desperate to enter another country beset by bloody turmoil. Only, this time, it’s his own. The United Kingdom is suffering the biggest loss of life to military emergency services and civilians since World War Two. Thousands are killed in the shape of an insurrection designated Albion by the British government under siege. Killing fields are no longer in the Middle East but gruesome war zones with household names like Costa Coffee Ted Baker and Dorothy Perkins in blood-soaked shopping malls cleared of J’s by the young, battle-hardened soldiers of Task Forces Trebuchet.

SAS officer Rory Houston helps his old friend Ryan and his team fly to the UK from Russia to evacuate his ex-wife Jenny and his boys to his old, once-peaceful log cabin in the English Lakes that becomes the violent epicenter of a traumatic, heart-breaking, and possibly last disturbing mission as he is hunted by psychopathic London gangsters that force Ryan to initiate action in the shape of Operation Ark, a military precision plan to finally save himself and his family from all those that wish him harm.

Will the Irish warrior, still struggling with PTSD, finally escape the clutches of the anonymous global puppet masters?

What listeners say about The Albion Insurrection

These Stories Just Get Better

Having followed these stories from the first book (Sons of Eirinn) it has been so pleasing to follow the characters’ development. The author clearly knows his stuff (which he does from personal experience) and the narrator captures the characterisations perfectly. You know exactly which character is speaking due to the narrator’s varied vocal range.
The sound effects and music add to the enhancement making this reviewer experience true Theatre Of The Mind.
Looking forward to book 4.
Please keep these books coming.

Simon Williams narration, is perfect for the telling of an ex SAS officer .

We find our warrior still struggling with PTSD finally escape the clutches of the anonymous masters?
Great paced and full of action , Ryan and his team fly to the UK from Russia to evacuate his ex-wife Jenny and his boys .
Recommend

really good book that you need to listen to from book 1 to the third book. highly recommended action book