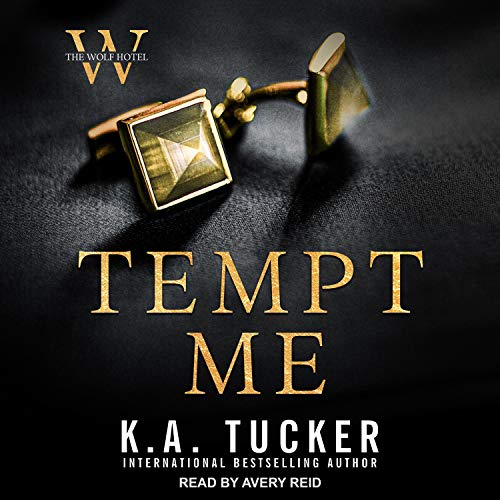 I ran from home to escape heartbreak, only to deliver myself into the hands of a wolf.
Henry Wolf, that is.
Heir to a luxury hotel chain, infamous playboy, arrogant bastard...and my new boss.
Why he wants me, Abbi Mitchell - a girl who lacks experience on every front that would matter to him - as his personal assistant, I cannot fathom, especially when I keep messing up in the most spectacular way.

Did I already mention he's a bastard?
A beautiful, moody one, who's quick to demand, slow to apologize.
And toying with me every chance he gets.
Testing me.
Screwing with my head in a way that makes my body crave him.

He knows it, and he doesn't hide the fact that he enjoys doing it.
He says he doesn't want me for more than my mediocre computer skills and color-coding flair.
He says he's not willing to risk losing his empire for a tangle in the sheets with "the help."

But I'm beginning to think that's a big, dirty lie.

What listeners say about Tempt Me

This was an ok listen and I think I’ll give the next book a go and see where the series is going.

This fantastic, steamy romance has it all. I love the friendship, of sorts, that develops between the stern boss Henry and the sweet and innocent Abbi; their chemistry is all kinds of hot!
It’s not the first time I’ve read this book but it’s the first time I’ve listened to the audiobook version and the brilliant narrator brought the story to life beautifully. You won’t want to miss it!

if you are over 20 don't bother

Well written, very well narrated. this is the type of store that would normally bore me as i don't enjoy books that are based on romance alone or sex only i like to have different feeling while i am listening/reading a book. this one is a little funny, a little sad and a little sexy with a dash of suspense. do not pass it up read the first one and if you like it keep going. i am just about to start book 2.
I TAKE ALL THE ABOVE BACK IT HAS BECOME THE MOST IMMATURE H I HAVE EVER READ. THE WHOLE THING GOES DOWN HILL AFTER THE FIRST BOOK.

I’ve been seeing all the positive reviews and finally started book one. It started off good but it spiraled down for me. The quiet 30 plus year old billionaire must have the 21-year old country girl virgin employee. Maybe it’s just me or I should’ve read it instead. I will not continue the series. Not credit worthy for me.

Audible review. Single POV (Abbi's). Book 1 of 5 (the fifth book is 'Ronan') in The Wolf Hotel series. The narrator does a great job. I listened at speed 1.25. This book is a slow burn until the last 20% and that last 20% is a 2 alarm fire. Trigger warnings: voyeurism, FF, cheating and the word "mama" is used way too much.

Henry Wolf is a 31 year old single hotelier, has one sibling (an older brother named a Scott), is being sued by his former personal assistant, is colorblind and is set to take over his family's business in a month. Abigail Mitchell (aka Abbi) is a 21 year old virgin college student whose fiancé recently cheated on her. She applies to work for the ground crew of the new Wolf hotel located in Alaska to escape spending her summer off in her small town with her cheating ex. Henry and Abigail are an unlikely match but their chemistry is off the charts. JP

I was hooked after 10 mins and couldn’t put it done! Totally worth my credit!

first book was good,... the rest were rough.

So the first book was AMAZING! And I was hooked! It is SO well written and has some very funny and surprising scenes too! HOWEVER the rest of the books fell so flat for me,... there was ZERO character development unless you call cheating and exploring polyamorous sexcapades with no connection some sort of developement,... Henry has no real emotion other than anger-and seriously he should be mad lol, what a disaster he's left in. There's zero insight into what he's thinking, so his character was very one dimensional which made the entire romance element dim,.. a lot. If you like emotional frustration and a train wreck of decision making, but you want super spicy scenes with no real love connection, read this series!

The description did not say this was a story about a 21 yr old virgin and a 31 yr old billionaire. The story is a mix between Pretty woman and Cinderella. The characters are one dimensional and frankly ridiculous. There is no connection between anyone. I would say the age group on this book would be a 13-16 yr old romance not adult. Would not recommend. Returned the book and returning the audible. The narrator was great.