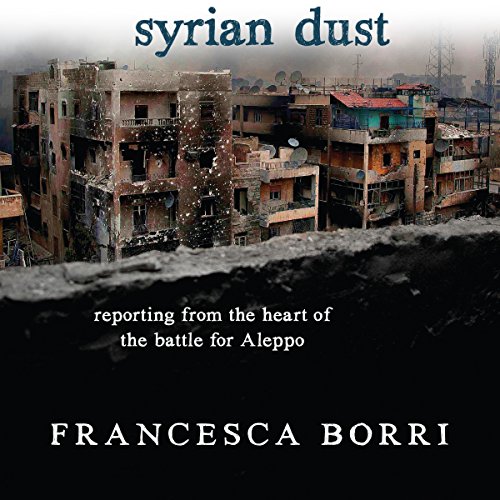 August 21, 2013: A chemical weapons attack on the suburbs of Damascus reminds the world of the existence of the Syrian war. Hundreds of journalists from every corner of the world rush to the frontier only to leave disappointed when Obama decides not to bomb. They leave behind 200,000 estimated victims, and more than half of a population of 22 million people dispersed or refugeed in nearby countries: the worst humanitarian crisis since WWII according to the UN.

Francesca Borri is one of them. But she does not leave. She is 30 years old. For months she covers the battle of Aleppo as a freelance reporter. And she quickly realizes that to report a war is to hide with dozens of women and children, even a baby, born there, in a grave, "a piece of soil under the ground that is as expensive as three houses" or to scavenge for anything to burn for some warmth, "a broken slipper, the plastic hand of a toy" or to mistake bloody figments of skull for rubble. To report a war is also to meet with officials more worried about the stain of snow on their Clarks than the people they are supposed to help. It is to explain what is happening in Aleppo to journalists who have only been there once, on vacation, and bought a carpet. It is risking one's life because of the jealousy of a fellow reporter. And it is also about dreaming of driving at night with the windows open, about remembering impossible little things, the particular light on that day in that café at the beach when you were a kid, the eyes of people you love, all the minuscule simple joys that can be lost in a moment.

Syrian Dust is a raw and powerful account of the Syrian war that throws the listener right in the middle of it, without any shelter.

What listeners say about Syrian Dust

So Tough, So Good

This brutal depiction of a Syrian no man's land that was once Aleppo, caught between Rebels and Assad, had me on the edge of my seat. Borri was embedded there for two years and it's non-stop. Both the rebels and Assad are taken to task for their lost humanity. She displays the lost sense of morale (and morality) when war drags on and on. You get the sense that they no longer know what they're fighting for.

Syria and the refugee crisis is in the news right now, and this writing gives a vivid picture why it's unlivable. Even if it wasn't so topical, this is worth reading. Borri is an excellent writer. Lean evocative sentences get straight to the point.

Narrator, Ruth Urquhart brings you right into it, like a breathless reporter witnessing events in real time.

Terrible. I took a chance despite the bad reviews because I was very interested in the subject. Unfortunately, the book is uninformative and just plain boring. The narrator is monotone and her accent makes her very difficult to understand. I would give it zero stars if I could.