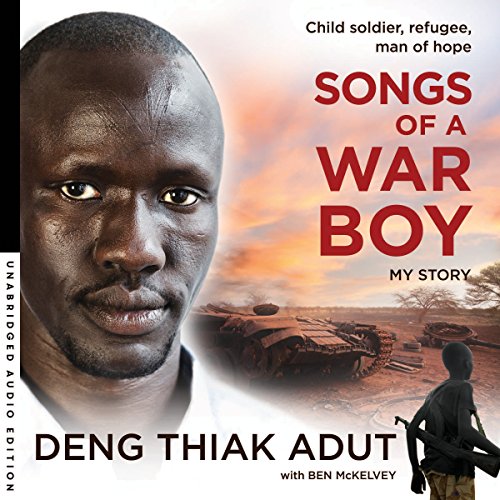 Songs of a War Boy

Songs of a War Boy

Deng Adut's family were farmers in South Sudan when a brutal civil war altered his life forever. At six years old, his mother was told she had to give him up to fight. At the age most Australian children are starting school, Deng was conscripted into the Sudan People's Liberation Army.

He began a harsh, relentless military training that saw this young boy trained to use an AK-47 and sent into battle. He lost the right to be a child. He lost the right to learn. The things Deng saw over those years will stay with him forever. He suffered from cholera, malaria and numerous other debilitating illnesses, but still he had to fight.

A child soldier is expected to kill or be killed, and Deng almost died a number of times. He survived being shot in the back. The desperation and loneliness was overwhelming. He thought he was all alone. But Deng was rescued from war by his brother John. Hidden in the back of a truck, he was smuggled out of Sudan and into Kenya. Here he lived in refugee camps until he was befriended by an Australian couple. With their help and the support of the UN, Deng Adut came to Australia as a refugee. Despite physical injuries and mental trauma, he grabbed the chance to make a new life. He worked in a local service station and learnt English watching The Wiggles. He taught himself to read and started studying at TAFE.

In 2005 he enrolled in a bachelor of law course at Western Sydney University. He became the first person in his family to graduate from university.

This is an inspiring story of a man who has overcome deadly adversity to become a lawyer and committed worker for the disenfranchised, helping refugees in Western Sydney. It is an important reminder of the power of compassion and the benefit to us all when we open our doors and our hearts to fleeing war, persecution and trauma.

Deng Adut is a lawyer working in Western Sydney. He uses his spare time to help other Sudanese refugees. Ben Mckelvey is a freelance writer and editor from Sydney who has filed for Good Weekend, GQ, Voyeur, Rolling Stone, The Bulletin, Cosmo, Cleo and the SMH, Age and West Australian newspapers.

Ben's previous gigs have included editing Sport&Style and Juice magazines and working on the Sydney Morning Herald as a senior feature writer. He has been embedded with the ADF in East Timor and Iraq and has worked independently in Iran and Afghanistan.

What listeners say about Songs of a War Boy

Captivated after the first chapter

The first 3 chapters are enthralling with how it writes with the speech of a child but then bouncing back to an adult. This book is not just a captivating story but also an educational piece on giving us an insight into a group of people who have moved to Australia. It highlights the unknown difficulties of moving to a developed world and the prejudices that the immogrants still face. I am better for coming across this book.