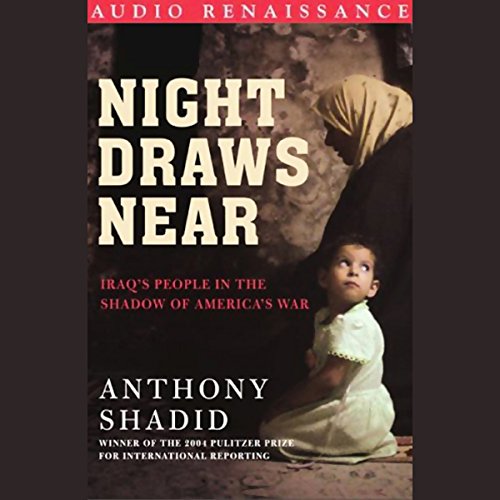 From the only journalist to win a Pulitzer Prize for his reporting from Iraq, here is the riveting account of ordinary people caught between the struggles of nations.

Determined to offer an unfiltered version of events, the Washington Post's Anthony Shadid was neither embedded with soldiers nor briefed by politicians. Because he is fluent in Arabic, Shadid, an Arab-American born and raised in Oklahoma, was able to actually disappear into the divided, dangerous worlds of Iraq. Day by day, as American dreams clashed with Arab notions of justice, he pieced together the human story of ordinary Iraqis weathering the terrible dislocations and tragedies of war. Through the lives of Sunnis and Shiites, men and women, American sympathizers, and outraged young men newly transformed into martyrs, Shadid shows us the journey of defiant, hopeful, resilient Iraq. Moving from battle scenes to subdued streets enlivened only by the call to prayer, Shadid uses the experiences of his characters to illustrate how Saddam's downfall paved the way not only for democracy but also for an Islamic reawakening and jihad.

Night Draws Near, as compelling as it is human, is an illuminating and poignant account from a reporter whose coverage has drawn international attention and acclaim.

"The book, which moves among scenes and characters like a picaresque novel, is not only a pleasure to read but a welcome source of information. Shadid offers just enough history and context to orient the reader, and he includes the kinds of details, adages, prayers, lyrics from pop songs, that make a place come alive. In the end, Baghdad is the character he mourns most." ( Publishers Weekly)
"A frequently moving and sometimes heartbreaking portrait of individuals striving to live their private lives when circumstances often make the pursuit of personal happiness almost impossible." ( Booklist)

What listeners say about Night Draws Near

Would you consider the audio edition of Night Draws Near to be better than the print version?

Hearing the author's voice especially now that he has passed is amazing.

What was one of the most memorable moments of Night Draws Near?

History of the area is eye opening

It always sucks the life of of the book. The information is good, the writing ok but a little flat. It's just hard to pay attention to and follow because of the monotone.

Too little, too late

This guy is not much of a narrator, and not much of a writer either. Instead of a coherent overview of what happened, all we get is a mishmash of stories and pieces of Bush administration polices mixed together.