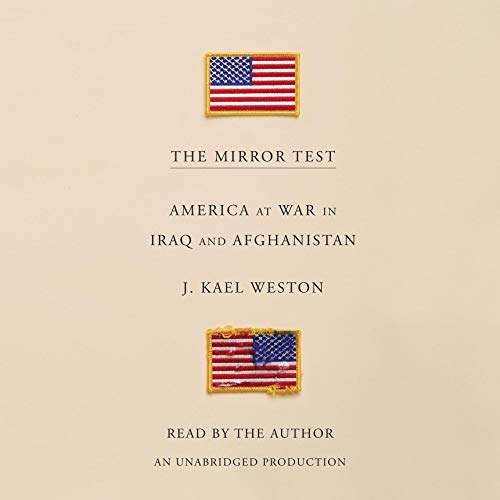 A powerfully written firsthand account of the human costs of conflict.

J. Kael Weston spent seven years on the ground in Iraq and Afghanistan working for the US State Department in some of the most dangerous frontline locations. Upon his return home, while traveling the country to pay respect to the dead and wounded, he asked himself: When will these wars end? How will they be remembered and memorialized? What lessons can we learn from them?

These are questions with no quick answers but perhaps ones that might lead to a shared reckoning worthy of the sacrifices of those - troops and civilians alike - whose lives have been changed by more than a decade and a half of war.

The overall frame for the book, from which the title is taken, centers on soldiers who have received grievous wounds to the face. There is a moment during their recovery when they must look upon their reconstructed appearances for the first time. This is known as "the mirror test". From an intricate tapestry of voices and stories - Iraqi, Afghan, and American - Weston delivers a larger mirror test for our nation in its global role. An unflinching and deep examination of the interplay between warfare and diplomacy, this is an essential book - a crucial look at America now, how it is viewed in the world, and how the nation views itself.

"Kael Weston is the conscience of our wars. After spending more time in Iraq and Afghanistan than any other American diplomat, he has emerged with a powerful-yet-nuanced story of sacrifice, misadventure, humanity and resilience. This is not another war memoir or a volume of combat reportage, but one of the few truly great and enduring books about America in the post-9/11 world." (Rajiv Chandrasekaran, author of Imperial Life in the Emerald City and Little America)
"Kael Weston is an American hero. He has spent more time in Iraq and Afghanistan than any general, diplomat, journalist or grunt. He has seen the wars up close, lived their cultures, watched people die. As a front-line political officer for the State Department, Weston has perhaps seen more of Iraq and Afghanistan than any single American. But what makes this book special - what makes Weston special - is his ability to transcend his own experience and bring it all home, and force us, as Americans, to ask ourselves the larger questions that these wars demand. This is a necessary book, and one that will last." (Dexter Filkins, author of The Forever War)
"Few Americans have served their country with greater courage, commitment and lucidity than Kael Weston. As the United States comes to terms with over a decade of war, it needs his values and vision." (Roger Cohen, author of The Girl from Human Street and Soldiers and Slaves)

As an American with no personal ties to the wars in Iraq or Afghanistan it is (and has been) incredibly easy to overlook the toll that these wars have taken on our country, our soldiers, their families, and the natives of the countries invaded. This book provides raw insight into the true costs of war, and the price paid by all involved. This is the first book about any war that I've ever read, but after doing so I feel compelled, and obligated as an American citizen, to learn more and ask more about America's engagement in previous and future wars. Thank you Mr. Weston for your service, and for bravely and honestly telling your story.

As good as the first time

I've listened to this audiobook six times and hear new things I missed before. I'm ready to listen again.
I've especially enjoyed sharing this audiobook with other Marines who served in Iraq and/or Afghanistan as I did.
I thought the authors narration of his book was the perfect choice with his voice inflections spot on with stories told. I personally related to this book 100%.

The author paints a vivid and sympathetic account of those caught up in war; from the soldiers, generals, and bureaucrats of the state department to the local politicians, community leaders and children in Afghanistan and Iraq. He relates some disturbing and depressing descriptions so there were times I cried or had to put it down but these are some very important lessons about armed conflict. The delivery of reading is dispassionate and not at all lively but I found it engrossing to listen to because of the story.

this book is a must read for those who elect governments, and call themselves citizens.

I admire Kael, and I am a bit jealous of many facets of his time in Afghanistan and Iraq. In some ways this is a travelogue, I wish it used his experiences to provide more insight on what I see as 16 years of failed policy. I appreciate the book, and yet those who may need to read it won't, like so names unread from the messages he left on the computer at the Bush Presidential Library. Due to his position he was able to have meetings with Iraqis and Afghans that I will never have as a man in uniform. And that is one of the best aspects of the book, a fresh perspective of our longest wars.

Where does The Mirror Test rank among all the audiobooks you’ve listened to so far?

The most honest and clearheaded exploration of modernity, conflict and the inter-personal consequences of America at war.

"The Ego has landed."

The scenes in Fallujah, state-side travels, reflections on "why," and so much more. This is a thick book, with a great deal to absorb. A beast of a book. Deserving a place in the pantheon of essential reads of our century. Also appreciate the rich and engaging discussion of Kael's many personal relationships formed with Iraqis and Afghans. Spending almost a decade in war zones, serving as the top (and sometimes only) foreign service diplomat in country, Kael presents a narrative that is nothing short of amazing. Remaining compassionate, and kind, while honestly exploring (with the reader) the forces, dynamics and sacrifice of a Nation at war, and the countries caught in the middle.

A beast of a book. Deserving a place in the pantheon of essential reads of our century.

----I hope you do read this. It is transformational. A must.

what is a good book. Lot of good information. The narrator narrator was too monotone for my taste. I think you would be a great book to read versus listening to it. even though about wmds was a contradictory to Dan Wrights and Chris Kyle book.

A must read (or listen)

This is a comprehensive look at war and how it affects all sides. Many parts are hard to get through but it's important for us as a national to know what our actions do on a personal level.

It's certainly worth the time and is a unique view into how wars are really fought and won or lost.