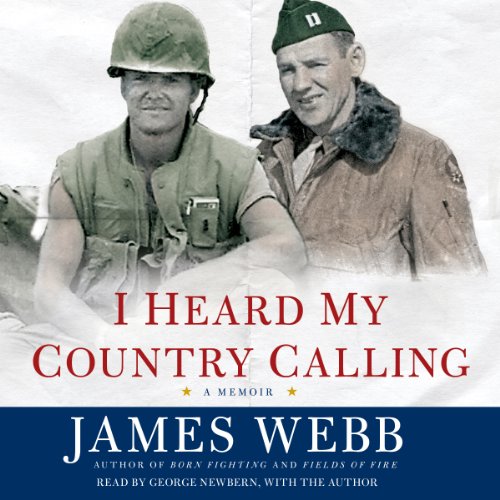 I Heard My Country Calling

I Heard My Country Calling

James Webb, author of Fields of Fire, the classic novel of the Vietnam War - and a former U.S. Senator; Secretary of the Navy; recipient of the Navy Cross, Silver Star and Purple Heart as a combat Marine; and a self-described "military brat" - has written an extraordinary memoir of his early years, "a love story - love of family, love of country, love of service" in his words.

Webb's mother grew up in the poverty-stricken cotton fields of Eastern Arkansas. His father and life-time hero was the first of many generations of Webbs, whose roots are in Appalachia, to finish high school. He flew bombers in World War II, cargo planes in the Berlin Airlift, graduated from college in middle age, and became an expert in the nation's most advanced weaponry.

Webb’s account of his childhood is a tremendous American saga as the family endures the constant moves and challenges of the rarely examined Post-World War II military, with his stern but emotionally invested father, loving and resolute mother, a granite-like grandmother who held the family together during his father’s frequent deployments, and an assortment of invincible aunts, siblings, and cousins. His account of his four years at Annapolis are painfully honest but in the end triumphant. His description of Vietnam’s most brutal battlefields breaks new literary ground. One of the most highly decorated combat Marines of that war, he is a respected expert on the history and conduct of the war.

Webb's novelist’s eyes and ears invest this work with remarkable power, whether he is describing the resiliency that grew from constant relocations during his childhood, the longing for his absent father, his poignant goodbye to his parents as he leaves for Vietnam, his role as a 23-year-old lieutenant through months of constant combat, or his election to the Senate, where he was known for his expertise in national defense, foreign policy, and economic fairness. This is a life that could only happen in America.

Opened the door so that I could see into my Father’s generation.

This book opened the door so that I could see into my Father’s generation. Like the author I am a combat veteran but I never understood what drove my Father to succeed until I read his book.

I had already read Fields of Fire and I saw many of the same situations and characters in the author’s experience in Vietnam as he wrote of in Fields If Fire.

Inspiring and full of hope for our country

I didn't think that I would like this book when I first started listening to it. I knew very little about James Webb until now. But I couldn't stop listening. This is a must read for anyone who has ever questioned the motivations of our politicians and government officials, and the direction that our country is headed. What an extraordinary perspective from an extraordinary human being.

This guy is great

James Webb is one of the greatest writers of the baby boomers generation . He is up there with Steinbeck and Hemingway