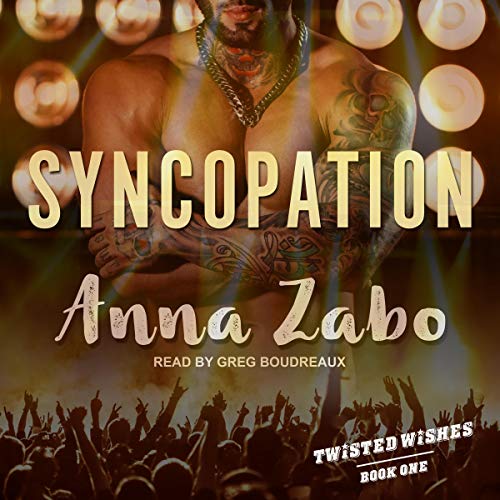 By: Anna Zabo
Narrated by: Greg Boudreaux
Try for £0.00

There's no resisting the thrum of temptation in this male/male rock-star romance from genre-favorite author Anna Zabo!

Twisted Wishes front man Ray Van Zeller is in one hell of a tight spot. After a heated confrontation with his bandmate goes viral, Ray is hit with a PR nightmare the fledgling band so doesn't need. But his problems only multiply when they snag a talented new drummer - insufferably sexy Zavier Demos, the high school crush Ray barely survived.

Zavier's kept a casual eye on Twisted Wishes for years, and lately, he likes what he sees. What he doesn't like is how out of control Ray seems - something Zavier's aching to correct after their first pulse-pounding encounter. If Ray's up for the challenge.

Despite the prospect of a glorious sexual encore, Ray is reluctant to trust Zavier with his band - or his heart. And Zavier has always had big dreams; this gig was supposed to be temporary. But touring together has opened their eyes to new passions and new possibilities, making them rethink their commitments, both to the band and to each other.

What listeners say about Syncopation

Despite liking the author’s previous books, I was worried about this premise as I’m not a huge fan of second chance romances. But this isn’t really that. Ray and Xavier knew each other before but weren’t previously together. It’s important that they both grew into adults with pro skills in the meantime.

I liked how the music & performance was central to the story, not just a backdrop for romance. It was thrilling to watch their success unfold. I liked how they had both (all) worked hard to improve their learned skills on top of their native talents. It was rather millennial, and refreshing, of them to not be drugged out like rock stars of yore. I liked that the band all respected each others talents and skills.

Another reviewer was frustrated that Ray would listen to someone who didn’t like him, but I thought it was understandable. Carl had such power over the band; Ray couldn’t get away from or ignore his gaslighting. Until Xav impressed on Ray that he truly had support from him & the band. And while the reasons behind Carl’s nastiness seemed a little petty, it doesn’t seem impossible, since we all know even top tier rock personalities like Prince & Taylor Swift and others have had truly vile, exploitative recording contracts.

Some of the growth came from having differing musical training, some was personal concerns and personalities. I liked the guys’ quirks and found them rather relatable, being a little weird and (despite reading a lot of romance) not being much given to romance myself.

Steam: Hot. Explicit, M/M kink with a mild-caring D/s focus. There’s bruising but not harm. It takes a while to get there but once the romance gets going, sex & kink remain a focus, as they should.

Narration: A quality narration really improves the experience. GB does a great job conveying feeling without tipping over into melodrama. Pitch perfect, as the kids say.

Didn’t finish ... I really wanted to but by Chapter 15 I just couldn’t take it anymore . I skipped to the last two chapter s just so I would have some resolution . I liked the MC’s but truly truly just couldn’t understand how someone who fought to turn a garage band into a raging rock band could be sooooo damn whiny . the manager - holy crap he was intense and I just couldn’t take another word. And as much as I appreciate learning and reading about the various shades of the queer spectrum - a romance novel with a MC that’s aromantic? why insist and drill into the reader a character that’s aromantic ... who does and says and feels the same emotions that are typically categorized as love ? I mean call it what you want but isn’t romance/love subjective anyway ?
Soooo ... Yeah. That’s it.

P..S. The narrator is amazing !

I loved the way the relationship between Ray and Xavier developed. They are perfect for each other. And so hot! Greg Boudreaux is his usual stellar self.

The depths of men’s souls

The author has an astounding understanding of the depths of the souls of her characters and a writing ability to express them to us; the reader is perfect with his own ability to bring her text to the depths of our souls !!

Checked all my boxes!

I choose my listens based on the genre, author, and narrator. I will not hesitate to return an abook unfinished if the author does not write as if writing were a true craft and if the narrator is just reading and not performing. This was my first Zabo book and they have found a permanent place on my go-to list. I gave it a try because Greg B was the narrator. I am looking forward to exhausting Zabo's repertoire and then eagerly awaiting new releases...providing they continue to choose great narrators. ;)

As an adult...if you knew someone hated you, would you really believe anything they said about you? I know getting treated unfairly can have an impact no matter who you are, but some of the protagonist thoughts in this was a bit ridiculous. Also, "I love you, but I can't, or I don't but I do"...was a bit much for me too. Over all I do like the characters and story progression, even though the inner dialogue can get rather repetitive. The narrator is so freaking good!

A toast to Entertainment!🍷

Ray and Zavier's story was crazy entertainment. I love sexy rock and roll stories with a twist. And their story fit the bill perfectly. The drama was none stop. The passion was heated. And the suspense was nail biting. The narrator voices were incredible! I read along, and the pace of the story was right on point! I so recommend their story! Enjoy! 🍷

I really loved these characters and it's an intriguing story. The narration is also superb! Well done, and really looking forward to the next book!