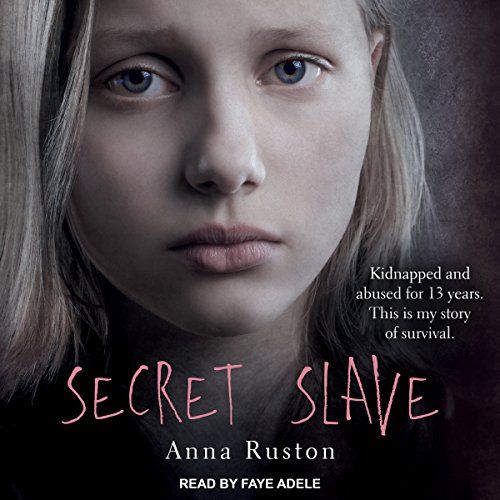 Growing up in a deeply troubled family, 15-year-old Anna felt lost and alone in the world. So when a friendly taxi driver befriended her, Anna welcomed the attention, and agreed to go home with him to meet his family. She wouldn't escape for over a decade.

Held captive by a sadistic pedophile, Anna was subjected to despicable levels of sexual abuse and torture. The unrelenting violence and degradation resulted in numerous miscarriages, and the birth of four babies.... each one stolen away from Anna at birth.

Her salvation arrived 13 years too late, but despite her shattered mind and body, Anna finally managed to flee. This is her harrowing, yet uplifting, true story of survival.

What listeners say about Secret Slave

Good to hear a story of survival, but the descriptions of her trauma are very graphic and detailed so be prepared. Not for the faint hearted.

This account is simply awe inspiring! I cannot believe that these terrible events weren’t stopped on the number of occasions that professionals became involved!
Far more questions should have been asked m!
I hope that we can learn a number of valuable lessons.
Well done for telling your side - the truth! What a huge amount of strength you have!

Such a sad story horrific details shows how disgusting Muslims are. Poor women I wish she got justice for the way the sick twat treated her and took her life away.

One of the best audible books I have ever heard. A must read. Heatbreaking and really well told

Fantastic read, my heart goes out to Anna Ruston.

My heart ached listening to this ladies horrible "life" how she trudged on just biding her time to set out her escape, Many men or women would have given up with life after experiencing all of this but thank you Anna for giving us an insight as to what you want through :( but I'm so happy she has now found her love, who she always kept that place in her heart for him 😘

What a good story and to think it was all true is unbelievable what that girl went through and to come out the other side is a tribute to her iron will .

Shocking that even all those years ago no one noticed or if they did they turned a blind eye. It’s a shame that back then and even today things like this can go on and is disguised by way of culture so many do not ask questions as it’s accepted. Very good book and good narrator. Good to listen to.

I have listened to many books describing horrific life ordeals, this one though, was an extremely hard one to listen to! Yet I couldn’t stop because I needed to know that this little girl has found a way out! My heart goes to her, and to all people suffering abuse. I gave the story only 2 starts because it seemed inappropriate to give it a high rating considering how bad the little girl suffered. 5 starts for her courage to speak up and put it in writing. I just hope that she would summon the courage to seek justice for herself.

Well read and very touching. couldn't put it down from start to finish.
Great

Very well done. The stuff that Anna went thru is something I can't put into words. It's a very good book. I'm listening to it again.

Loved this book! Anna is a very strong Woman and she is Loved so much

This very sad true story is hard to read; not because of the writing, but instead the story content. I can’t imagine how someone’s lives a “normal” life after enduring such torture.

Kept me on edge

This true story kept me on the edge of my set from beginning to end. She shared the greatest amount of detail. Horrible nightmare was her reality, 13 years. My heart goes out to her. I wanted to go through the story and strangle that intire clan full of evil demented people.

I cried for her, and prayed throughout the story. None of what happened to you Darling was your fault. I will continue to be praying for you, an pray that you gain the strength to bring your abuser to justice! God Bless you, Darling!

it is utmost insane that anyone has been forced to live through such vile and horrible events. listening to it made me sick to the gut and I could not finish the book. I am so so sorry that this is a true story. I wish all the best to the author.

Tragic and horrific story! The book was very graphic and sad! With that being said it was a book I couldn’t stop listening to. People need to hear these stories and be aware of things like this that go on. It took one nurse to notice small things and realize this person needed help.

Powerful story of a kidnapped girl's survival. A wake up call to all medical professionals and police about signs to look for as to when to interviene. Hard to listen to due to content, but very necessary. I doubt few girls would have been as strong as Anna was.

It's a tragedy to know that this goes on in our world, but I am so proud of Anna to be brave enough to talk about her survival!!!!

Such a touching and painful story.
A story about strength and growth. If anything support the strong female author.

I was crying, begging her to run and keep running , the amount of pain and suffering that a poor young child had to indure makes me sick and saddned. I was hoping qt the end she took the whole family down. But just knowing that she survived and is thriving is beautiful.