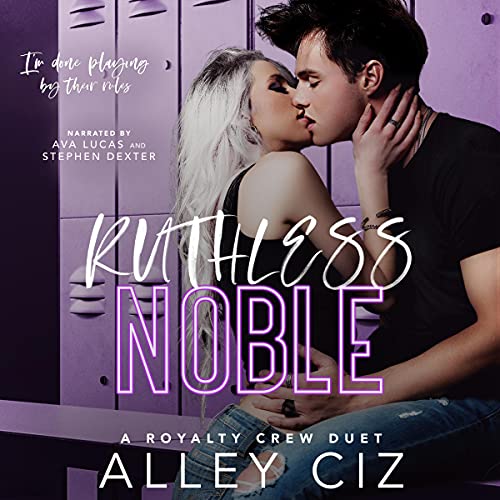 By: Alley Ciz
Narrated by: Stephen Dexter,Ava Lucas
Try for £0.00

I was the epitome of control. Cocky. Powerful. Ruthless.

Until the day Savvy King swaggered into our world.

She defied me at every turn, refusing to yield to my command.

Her insolence infuriated me as much as it captivated me, until the battle consumed us.

She’s the perfect counterpart to my reign. Except...the ring on her finger belongs to another.

People want to play politics with my life - with our lives. That is a mistake.

Don't underestimate what I'll do to claim her as mine and secure my queen.

Ruthless Noble is book two in The Royalty Crew Duet and cannot be listened to as a stand-alone. It picks up right where the cliff of Savage Queen left you breathless.

The secrets and lies are piling up around them. This Queen needs someone ruthless enough to stand by her side.

What listeners say about Ruthless Noble: A Royalty Crew Duet

Absolutely addicted to this series, love all the characters think my favourite was savvy and jasper! The narrators were great really brought the characters to life, just loved it.

I absolutely love this story! Being able with o hear it come to life was just the best! Absolutely recommend this!

Once again Alley Coz wrote a story to complete the Royalty Crew Duet, but oh my gosh…. Stephen Dexter and Ava Lucas completely brought my this one to life for me. I have a feeling I’ll be listening to this over and over.

This Bully-turned lover book has definitely made it to one of the top of my lost by Alley Coz!

Alley Ciz has done it again!! Another amazing story. I can’t decide who I’m more in love with, Savvy or Jasper?! Alley really delivered with this book. She totally slayed me with her words. So many amazing highs and an equal number of tough lows. The electricity between Savvy & Jasper was off the charts! I could feel the sizzle on my skin. You definitely need to read this book. Awesome narration by Ava Lucas & Stephen Dexter.