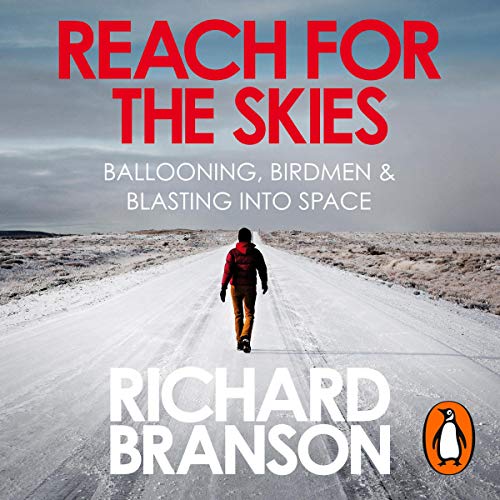 Reach for the Skies

By: Richard Branson
Narrated by: Adrian Mulraney
Try for £0.00

"As far back as stories go, pioneers have reached for the skies. In the last two hundred years, they have mastered the air and made the modern world possible. Today they are bringing outer space within our reach. They're inventors and toymakers, amateurs and adventurers, visionaries, dreamers and, yes, crackpots. Some have called them irresponsible, even dangerous. But I have met many of them. I have worked with them, and funded them, and flown with them. I admire them, and trust them, and I think they and their kind are our future.

"In this book I look at the history of flight through the stories and people who have inspired me. These are tales of miraculous rescues; of records made and broken; of surprising feats of endurance and survival, including some of my own adventures, as well as developments in the future of air (and space) travel.

"This is a story of pioneers, and of course it includes the world famous Montgolfiers and the Wright brothers. But I also want to describe some of the lesser-known trailblazers - people like Tony Jannus, who in 1914 created the world's first scheduled commercial flight, flying his passengers over the waters of Tampa Bay at an altitude of just 50 feet; the ‘bird man’ Leo Valentin, who in the 1950s jumped from 9,000 feet with wooden wings attached to his shoulders; and my friend, Steve Fossett, who dedicated his life to breaking records and having adventures."—Richard Branson

What listeners say about Reach for the Skies

Not only for aviation enthusiasts.

Wonderfully put together by RB and the Narrator has done an excellent content justice.

I've listened to this twice now and I'm still picking up parts I've either forgot or it didn't sink in first time around..
This is my back up book if I ever need a really interesting subject to immerse myself in

Fascinating but let down by poor narration

Branson's passion for flight is palpable in every phrase in this remarkable potted history of manned flight. It is well researched, full of interesting little morsels of information, and structured in as logical a manner as one could hope, given the breadth of material covered. There is a sense, in places, of the sales pitch for Virgin's various airlines and, in particular, Virgin Galactic, but this seems more an honest byproduct of the author's infectious enthusiasm for the subject than calculated self-promotion.

Mulraney's pacing is slow (I listened at 1.25x, which I very rarely feel compelled to do) and the tempo of some phrases awkward. I found him rather jarring, and would avoid choosing another work performed by him, which is unfortunate as he seems to have rather the monopoly on the unabridged audio versions of Branson's work.

I'm a big fan of Branson's writing style - he means it, it's from the heart and it's how he speaks. This is even more powerful as it's narrated by Sir Dick himself and you can hear his passion and love for the subject in every sentance. Not quite as engaging as 'Losing My Virginity' which is one of the best business audo books available but nevertheless a great yarn about manned flight and his own record-breaking feats and playing as a kid with Douglas Bader! I'm heavily into the history of science and there was a few terrific stories and short bio's that were detaield here. If you're into 'boys toys', 'flying', 'adventure' or simply Brand Branson you'll love it!