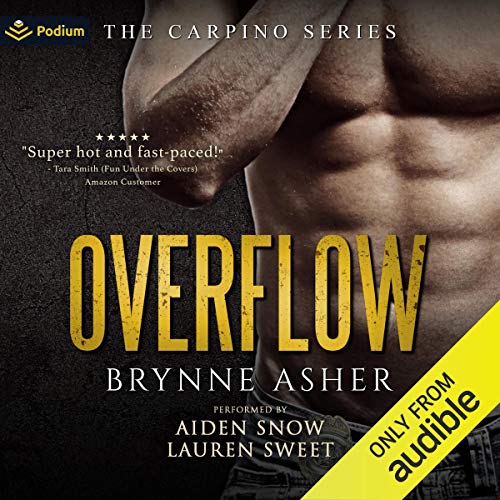 By: Brynne Asher
Narrated by: Lauren Sweet,Aiden Snow
Try for £0.00

There’s nothing like getting caught in the middle of an FBI raid to change your life....

That’s what happens to Gabrielle Carpino. Just when she forced herself to move on with life after tragedy touched her family, she finds herself thrown into a tailspin so swift, she can’t find her bearings.

Being cuffed and patted down by Special Agent Jude Ortiz is enough to wake anyone up. With his dark chocolate eyes and commanding ways, Gabby can't resist. And between battling criminals, flooded basements, fantasy football drafts, and her crazy Italian family, Jude also finds himself unable to resist her charms.

That doesn’t mean he isn’t wrestling feelings he hasn't allowed in years. Nightmares that are his reality have paralyzed him from living a full life. Yet, he can’t help himself when it comes to her, and Jude moves in to watch over Gabby.

But just when life seems to be settling down, demons surface from the past. Horrific ones that carry a vengeance so evil, no one saw them coming.

What listeners say about Overflow

Every second of this book is FANTASTIC!

Sweet Baby Jesus. I have never had a thing for cops, but I'm fairly certain Jude Ortiz just made me a fan - a really, really big fan. And Gabby needs to be my bestie - stat. To say these characters are beautifully written is the understatement of the century. And now, we can listen to them on audible? HOLY SCHNIKES. Is it hot in here? No? LIES. Yes it is. I just finished listening to Gabby and Jude fall in love over and over again for hours on end. And it was the best day of my life. (Don't tell my husband and kids lol)

Story Line: Gabby is an interior decorator who has the most unexpectedly humorous first meeting with our hero Jude at her friend's house. It's funny, yet I'm 100 percent certain if I were in her shoes, I would not have been laughing or as adorable. Nope, I would be an embarrassing wreck. Anyways, they meet. They meet again. Next thing you know we are falling in love with every single one of those delicious Carpinos. Then everything hits the fan, and I mean EVERTHING. Then I skip a bunch of stuff that happens because, hi spoilers. And here we are. Me telling you Gabby and Jude are serious couple goals. And Jude is now the man I tell Mr Laundry he needs to be like. Give me alpha Mr. Jude Laundry all day and alllllll night.

Interaction: You know how you have your laminated list of guys who have all the hot qualities you want in a significant other? Oh come on. I know I'm not the only one who reads certain traits about these hot AF alphas and categorize them away in my rolladex for future spank bank material. Okay, awkward. Anywho. Jude is probably the first alpha I ever fell in love with in fictional form. He's bossy, yet melt your insides sweet. He acts so tough on the outside, yet he's adorable with Gabby's dog. Come on. Guys who are good to animals? You literally cannot get an more swoonworthy than that. THEN, listen to his voice on th audio book? Swear to the lord above, I was a giant puddle of goo every single time he spoke. That deep voice left me tingling ALLLLLL over.

Laundry: I'm going to be 110 percent honest here. I knew the laundry in this book was on fire. Like, 4th degree burns on my hands from my kindle bursting into flames hot. I was so scared to listen to it. I shouldn't have been. Because not only did I listen to certain scenes SEVERAL times. I also made Mr Laundry listen too. Which led to things... and now I need write formal thank yous to the author, the narrators, audible, and pretty much anyone else involved in this book.

Depth: Gabby and Jude's story is what romance novel dreams are made of. Hot? Obviously. Great characters? OMG yes and probably the most well rounded characters I've ever had the pleasure of reading. Story quality: THE FREAKING BEST. I laughed. I cried. I gasped. I bit all of my dang nails off. My insides clenched and sparked. And my faith in love was strengthened beyond all of my wildest dreams. Overflow is the perfect love story, with the best characters and a freaking brilliant story that flowed beautifully. How do you make something perfect even more perfect? Put it on audio with FANTASTIC narration. BOOM. AMAZING.

Just when I think it can't get any better...

What happens when the FBI busts into your high school friend's home and you get frisked by a sexy agent? Well, you experience something overflowing.

I honestly did not think this book could get any better. I was wrong. Putting voices to these characters was amazing! Listening to it on audio made it spectacular. The narrators did an exceptional job of bringing this beautiful book to life. Down to Gabby's quirkiness and Jude's deep sexy voice.

Jude butts his way into Gabby's life so effortlessly and the narrator portrays that perfectly. The chemistry between the characters is nothing short of amazing. I was sucked in from the get-go. Still as fast-paced and exciting from the start!

Coming from someone who doesn't normally listen to audiobooks, this book made me a believer. I promise you will fall in love with Gabby and Jude. Outstanding! I can't wait to hear the next audiobook!!!

No chemistry between characters, characters underdeveloped, female narrators reads too fast and struggles with masculine voice. Nothing drew me into the story.

Jude and Gabby are PERFECTION!!

One of my favourite novels by Brynne Asher, how could it be anything else when attitude filled Gabrielle Carpino is handcuffed and frisked during a raid at a friends house by the worlds sexiest FBI agent??

The narrators in this audiobook are excellent, Jude's voice is completely what I imagined when Gabby and the girls were talking about his raspy, sexy AF voice when they were chatting at Bonefish, and Gabby's voice completely matches Jude's description when he mentions her "shocked as sh*t voice, and attitude thrown everywhere, I loved them both!!

In the end, just like all Brynne Asher books I love the action, suspense, slow burn sexiness (how many times CAN one couple get interrupted??), and huge family love evident in every book she writes! I can't wait for Tony's story!!

So glad this is on audible now. Hope the other couples in the series get the same. Actually would love to be able to listen to all of BA's alpha men! Best way to reread favorites!

Love it so much!!

This is my very first time listening to am audio book and I really loved it.
The storyline is amazing. Gaby and Jude’s story was awesome. Very hot and good chemistry together.
Jude is one sexy and possessive alpha that works for the FBI and meets Gaby while doing a house raid. Love Gabi. She was sweet and love her ramblings.
Jude was perfect for Gaby and after losing her parents a few years ago and even though she had a big family that loves her, she was feeling alone.
Love the narration of Lauren and Aiden. It was just as I’ve imagined their voices to be. I’ve listened to it in one sitting.

At every opportunity by not respecting space, decisions, or body autonomy…and she lets him. Cringe worthy in a lot of ways.

Total let down at the end.

I was seriously loving this story alllll up until like the last 2 hours. Then it took a nose dive. I really wish there was a hint at Jude's big secret before almost finishing the book and already being emotionally invested in the characters. There are also infant loss triggers that I can't get behind. I fell for this story and the characters and felt completely blindsided by Jude's secret. I usually don't mind the twist at the end where the couple breaks up then gets back together, but this one was f*cked up. And Gabby forgives too easily. This would have been an amazing book but it missed it's mark. I won't be finishing the series as reading the blurb for book 2 looks to be the same kind of crap

No chemistry and boring. No build up b/t the 2 main characters. Pat down, 20 mins later an invite to a fantasy football draft and then they’re together? Disconnected and dull. Oh - and Lauren Sweet is annoying.