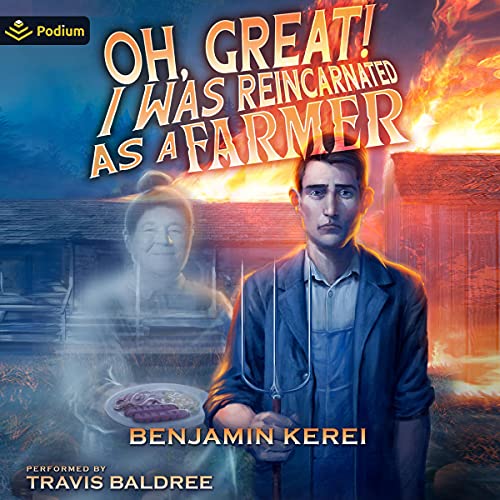 Oh, Great! I Was Reincarnated as a Farmer

By: Benjamin Kerei
Narrated by: Travis Baldree
Try for £0.00

What do you have when you blend a pinch of LitRPG, a touch of farming simulator, a sprinkle of epic fantasy, a whole cup of Isekai, and a dash of Home Alone? You have Arnold’s life.

Accidentally murdered by a cleric in another universe during a botched resurrection, Arnold, a semi-pro gamer, wakes upon an altar to find himself incarnated into the overweight body of a farmer who could have been his fatter twin. He’s not the hero. He’s not the villain. He’s certainly not the chosen one who is there to save the world. He’s a clerical error.

Now stuck on a new Earth, in a new universe, with no way home, Arnold must use his gaming skills to figure out how to level his farmer class to 100 and gain a second class which doesn't make him want to beat his head against the wall. There is just one small problem: Farmers don't gain experience from killing monsters. Like at all.

Follow Arnold on his hilarious journey as he stubbornly comes to grips with his new reality and tries to change his destiny from that of your typical farmer.

What listeners say about Oh, Great! I Was Reincarnated as a Farmer

I really enjoyed this book and only regret that now I'll have to wait a while for the next one. Funny and clever.

The story is different from the usual litrpg and a most enjoyable experience. There is humour, action, some fantastic world building and the pace is good.

The narrator is wonderful.

I can't wait for the next book.

if you like the NoobTown books I think you'll enjoy this one.

This is such an unusual take on the genre, I had so much fun with it, and as always, Travis' dulcet tones made it 100x better. Cannot wait to hear more from this author!!

really good definitely worth a credit

It's full of humor, if you like lit RPG books then you'll love this one

Overall this is a funny book. A little dark in the beginning but over funny for a litrpg. Good story really enjoyable.

I only give reviews for books that I enjoy and would reread/relisten to. This means that I almost exclusively rate books 5 stars. That does not mean that this book is a masterwork. It does mean the I enjoyed the story and would love for the author to be able to write more. Give it a listen if you’re a fan of the genre as it is definitely better than a majority of what gets published as LITRPG. I loved Travis Baldree’s narration as always. He is, in my opinion, one of the best in the business.

What a fun story, I love it!

This is truly a unique story. i love the concept of Arnold coming to the new world, hating what his class is, then doing everything in his power not to farm while still leveling up. Great idea! I can't wait for the next book.

Obligatory, Travis baldree is amazing. the southern accent threw me off for a about an hour, but it grew on me. As always, great job!

This was actually a fun book. Glad I gave it a try and can't wait for book two.

The world was shapes in a way that provided challenges that could not be solved in a normal fashion that provided a lot of funny and interesting plot points. Can't wait for the sequel.

Pleasantly surprised with how this one turned out. early in the book The MC makes a few questionable decisions but in the broader context of the story it all makes sense and comes into focus. there were a few technical hiccups in the writing but I don't blame anyone for mixing up a charisma score from one chapter to the next. I definitely say you should give this book a try especially if you're looking for something a good bit longer and more meaty than most lit RPG which seem to struggle to hit a 9-hour run time.

Literally one of the best books I've ever heard.

1. Narration is throughly top notch ( Travis Baldree is one of the best )
2. Storyline is extremely well executed.
3. A good balance of character and world building.
4. Moments of hilarity that literally had me in tears. ( The ghost scene in his bedroom is....... no spoilers; )
HIGHLY RECOMMENDED