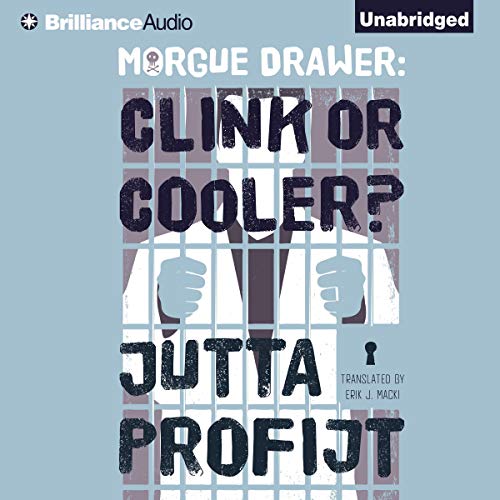 Amateur sleuth and restless spirit Pascha gets the chance of a post-lifetime when a reporter turns up dead. Detective Gregor Kreidler - a friend of Pascha's crime-fighting partner, coroner Martin Gänsewein - tops the list of suspects for the murder of Susanne Hauschild, who also happens to be Gregor's ex-wife. Martin already has his hands full with his girlfriend - who's ready to give birth any day - and he's too distracted to comb the streets, so Pascha decides to play ghost cop with gusto. He discovers that Susanne had been investigating a cluster of mysterious deaths at a retirement home before her own death. And retracing her steps leads Pascha to a shady nightclub owner with his own reasons for evading the law. With his unique ability to do detective work undetected, can Pascha solve the case?

What listeners say about Morgue Drawer: Clink or Cooler?

I did not enjoy this book as much as the previous episodes.

Do you think Morgue Drawer: Clink or Cooler? needs a follow-up book? Why or why not?

Not at all, Pasha should go into the light as soon as possible!

The Ghost of a Car Thief Turned Detective

Pascha, before he was murdered was a car thief with a fairly narrow range of interests-- women, action films, drinking, and cars. Since he has become a ghost who has not gone into the light, he has added solving crimes to this list. In this entry into the series one of the friends of the only person Pascha can reliably communicate with, Martin the forensic pathologist, is arrested for a crime and doesn't seem to be trying to help himself at all. So Pascha tries to help. Meanwhile Martin is focused more on his partner's developing pregnancy and the prospect of becoming a father, than on helping Pascha detect.

Translated from the German, this series has really captured my interest. It's a bit uneven, but I thought this one was one of the stronger entries. Pascha is at his crude, snarky best and the poor beleaguered Martin has to put up with Pascha and the revolt of his partner again Martin's efforts to wrap her in cotton wool for the duration of her pregnancy.

This is a new narrator but I didn't really notice until I finished listening to the book, which is the best outcome possible when a series has reached its fifth book with the same reader for the first four. I remember how annoyed I was with the change of narrators in the Jasper Fford Thursday Next series and that was only after the first book.

The story was o.k., but the new narrator was not as good as the original.

Great Story, but I Really Miss the Old Narrator

Great story as always! The narrator was ok, but wasn't as good as MacLeod Andrews. It wasn't just the change in having a new narrator after 4 other books in the same series (which, don't get me wrong, is annoying). However, the new narrator just isn't quite as good for this particular series.

This was a solid entry in the series. I have nothing against Mr. Haberkorn's narration, but I dislike that they switched after his style was established in the first four books. I hope they bring him back for any additional books.

This is a really fun and entertaining series, and this one is my favorite so far... Yeah, it's not high literature, or edge of your seat thriller, but all all the same it's some great mind and ear candy... It's an easy listen, the narration is perfect, and the silliness works... Even though Pasha is largely juvenile you can't help but like him... This is the best so far due to the nice underlying mystery, and the back and forth in time while Pasha is trying to figure things out... I also like that the author has become inventive in how he can communicate w/ more than Martin the coroner... I didn't want to stop, and when I did I kept finding a way to get back to it...

The descriptive narrative in this book utterly enthralled me. It was humorous, clever, and very well written. The storyline was fast-paced and carried the reader along like a flooded river- no breaks, no stopping, no lagging. I thoroughly enjoyed both the writer and the narrator and will look out for them in future