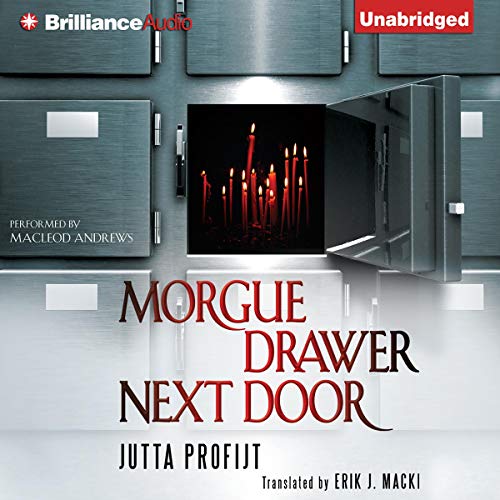 As crime-fighting teams go, Dr. Martin Gänsewein and Pascha are an unlikely pair. Martin is a shy, scrupulous forensic pathologist who spends his days autopsying dead bodies, while Pascha is the gregarious ghost of a former car thief whose murder Martin reluctantly helped solve. After narrowly surviving that adventure, Martin wants nothing more than a little peace and quiet.

Unfortunately, the good doctor is out of luck thanks to the arrival of Marlene, the spirit of a nun killed in a fire that ravaged her medieval convent and home. Though disappointed that his new sidekick isn’t a leggy blonde, Pascha empathizes with Marlene - and suspects that the deadly fire was no accident. The ghosts are determined to uncover the truth, but they can’t do it without Martin’s help.

Together with Martin’s girlfriend Birgit, the trio embarks upon a madcap (and frequently hilarious) adventure that will enchant listeners from beginning to end.

What listeners say about Morgue Drawer Next Door

Finally wore me down

While the performance and world building are good, the exuberant sexism finally wore me down. When our protagonist, the ghost of a car thief, asserts that prostitution will always be *necessary* "as long as women withhold sex" and the ghost of a nun who ran a shelter for battered sex-workers for 30 years, agrees with his analysis of *the* cause of prostitution, I ground my teeth, sighed and deleted the book.

It's one thing for our ignorant, young former car thief to hold, well, ignorant opinions. And he does. Hold many. However, often those same opinions are challenged by the behaviors or conversations of characters whom we respect and our young car thief thinks again. The crude sexist opinions he spouts about women, relationships with women, what women are good for, etc. seem to be impervious to other information. The lecture about prostitution was simply the last straw.

This book is an excellent piece of creative writing. I enjoyed all the sidespeak to the listener. It did not distract from the story one bit. It is a translation from German and all the humor shown through. I have a joke I will not use. The author created something wholly original and fascinating to listen to while hitting on social issues, spirituality and murder. I will definitely be listening to more in this series.
At first, I was hoping for more German accents but since it’s a translation into English I think the narrator did an excellent job translating the characters.

I highly recommend this book

Jutta Profijt did it again! She brought Pasha back for round two. I can't remember laughing so much or so hard at a ghost story/murder mystery. MacLeod Andrews was The perfect voice for Pasha.

Another great mystery and no Pascha has a partner. So many parts where I'm laughing out loud. I'm outside in my gardens digging out weeds and laughing my a## off! Can't wait for the next book. Never thought I would like it so much, sorry I waited so long to start this series of books. Now onto book 3.

I'm not a huge audiobook fan in general. I'd far prefer to read a book than to listen to it, but listening to books works well when I'm exercising, doing chores or walking around the city. So I usually keep an audiobook handy on my iPod when I can't hold a book in my hands & a different book on my Kindle for all other times.

Imagine my surprise, when I wanted to continue listening to this book rather than actually reading another during my commute on the train one day. And this was the first audiobook where my mind didn't wander at some point during the story!

Lovely story and outstanding narration which elevates the story even more.

Enjoyed it as much as the first book. The author extended the plot and characters in clever ways. The narrator is delightful!

After listening to the first book morgue drawer four, which was in my humble opinion was very good, I was anxious to listen to this book. Unfortunately, I was totally disappointed, this book was predictable and boring. Don't waste you time or money. You've been warned.

Great series. Yes I could tell it was translated but that didnt distract from the humor or over all story. Great light read

Good Second Act in the Martin and Pascha Series

Dr. Martin Gänsewein, forensic pathologist and the reluctant sidekick to a deceased car thief, Pascha, had hoped that solving the mystery of Pascha's murder would release the ghost to head on to where ever good car thieves go. This is not to be though. While Martin is recuperating from his own brush with mortality in the hospital, Pascha amuses himself by hanging around in the hospital hoping to find a spiritual companion in his strange in between state. He does find one, but as it is the ghost of a middle aged nun, it isn't the one he would have chosen.

However, Pascha is drawn into the odd events at the convent where a mysterious fire resulted in the death of one nun and the hospitalization of another.

I was interested in where Jutta Profijt was going to take this mismatched pair for the second in the series and I wasn't disappointed. While the pacing was a bit uneven and the beginning slow, it ends with some very lively action.

I took advantage of the Whispersync for audio deal which allowed me to take up my Kindle when the iPhone I was listening to it on ran out of battery at an important moment. It did start right at the point the audible had stopped.

The narrator, as before, was excellent.

some very funny parts that made me stop what I was doing so as to give full voice to my enjoyment. I enjoyed the first book in this series, both story and performance and likewise this second book. Mr. Andrews makes Pascha sound like he's from Queens, NY with the attitude to go with it. He can be boorish, obnoxious and insensitive as well as single-minded and soft-hearted. In other words, he's lovable.