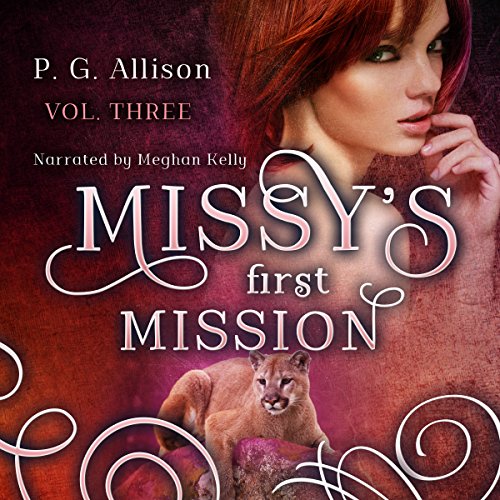 The US government has avoided using supernaturals in the past, concerned that public knowledge of their existence will pose greater risks than any benefits. But, after Missy agrees to help her Paranormal Branch buddies and one thing leads to another...the question then becomes whether Missy can somehow provide assistance during an international crisis without the world learning about her supernatural powers and abilities.

Meanwhile, when Missy interferes with sexual harassment at West Point by going around and putting everyone there on notice, she becomes the target. Controlling herself...doing things in plain sight which almost look humanly possible...that just might be her greatest ability.

This is another great book continuing the life of this extraordinary girl. It is funny and tackles some hard subjects very respectfully.

Missys adventures get better and better

If you could sum up Missy's First Mission in three words, what would they be?

What other book might you compare Missy's First Mission to, and why?

It's a great book. Comparisons never work as you might not like what I compare it too and this is another great book in the series. You can read it as a standalone if you are coming to this new but the other books are great too.

Have you listened to any of Meghan Kelly’s other performances? How does this one compare?

Yes, another great performance. I really enjoyed the narration.

I really like Missy as a character. Strong but compassionate and learning about who she is all the time. This story is another opportunity to get to know Missy. Great book.

I haven't read the first two novels in the series. A lot of novels start off confusing, but I didn't have any issues jumping into book # 3. I started the story a little skeptical by how the characters are focused on their appearance and relationships, but the story quickly picked up and we got to the meat of the urban fantasy. I thought it was a nice mix of pace and action that complemented the story well.

I haven't heard another story by this author, but I have heard the narrator before. Same as the other story, she's done a fantastic job.

Great Addition to the Missy the Werecat Series!!!

I have read the previous books from this series and would highly recommend reading them before book 3 but if you decide to go ahead and start with this one, you will still be able to enjoy it and follow easily. It could be consider a stand alone.

Missy is an awesome character! She is compassionate, supportive, fair, and an amazing heroine! She can do incredible things with her supernatural abilities but she is humble.

She helps someone that has been out to get her for awhile. She also manages to destroy some scum bags that used to abuse women in the Military! They were horrible and deserve everything they got!

Missy actually does 2 missions in this book and rocks both of them! Nobody can get the information she gets without being noticed.

The narrator does a good job bringing the story to life.

I really enjoyed this book. Not having read the first 2 books it was nice to discover I really didn't need to. The book stands on its own. I enjoyed the story, characters and mythology created. I did feel the story dragged at times, I found myself not paying attention sometimes. But overall it's a nice fun urban fantasy.

The narrator did a wonderful job. Great performance.

The Missy the werecat books are among my favorites. If you like action, steamy scenes and a kick as* main character this is the book for you. Missy is just amazing. This is one of my favorites books in the series.

Another great audiobook and story. Love this series and the characters in them. Good narrator also.

Wow, to be in battle and help out as much as she did and then return to Westpoint must have been such an honor.

loved it
the story picks right up where it left off. the narrater was the same from the others which makes it great

The narrator has done an incredible and fantastic job of narrating this story!


Missy, the female lead, has learned how to control her "Abilities" and is now helping the Military.

This book is full of Action and a bit of Suspense.

Overall, this book was Entertaining and was a great weekend read.


Meghan Kelly did well with the narration.