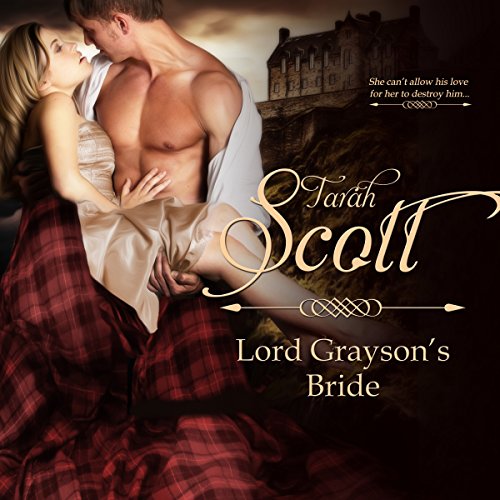 She can't allow his love for her to destroy him...

When Nicholas Spencer, Earl of Grayson, returns to claim the woman he loves, Lady Josephine Knightly isn't willing to forgive him for abandoning her six years ago. But neither can she resist the man he has become.

Two days after Josephine signs the marriage contract, she discovers a nasty secret that will destroy her family. The only way to protect them - to protect the only man she has ever loved - is to disappear...or die.

Nicholas won't make the same mistake twice and let Josephine Knightly go. She loves him. He felt it in their one kiss before he left and in the single kiss she allowed since his return. But she's doing everything in her power to sabotage the marriage, even before it's begun.

Nicholas doesn't care. If Hell is where he must live to have her, then she must stand by his side in the fire.

I found this novel to be a bit confusing. The very beginning started out that way and the more I listened the more confused I got. I m glad that it was finally discovered why Jo was doing the things she was doing. Fear is a powerful motivator and especially fear for the one you love.
There were several times when I wanted to stop listening but I got through it and the ending was good. A different narrator may have made it better.

I was given this book by the author for an honest review by Audiobookblast, although I had already gotten the ebook.

This was quite the thrilling story filled with romance, intrigue, and not to mention the steamy moments. It was very well written with nicely fleshed out characters, including a villain you'd love to hate. The entire time I was trying to figure out what the bug secret was and was surprised when it was finally revealed. I was very happy to see all turned it well in the end, and enjoyed the journey there. Who doesn't love a happy ending :)

Lord Nicholas Spencer returned to claim Lady Josephine Knightly as his bride. He had left for 6 long years and she loved him, but was doing everything in her power to have him call off the wedding. She even had him find her in a compromising position with another man. He did nothing but call the other man out to fight a duel. She had discovered a nasty secret that would destroy him. She must try to stop it. This is a wonderful story!

Josephine is one Naughty girl!

Josephine Loves Nicholas Spencer (Lord Grayson) and she really knows how to push Nicholas' buttons. She was caught by Nicholas in a room during a party sitting on top of a man. She almost gave up her virginity to one of the snobs of society. The man has a title and is also someone that Nicholas' hates with a passion.

This part really had me confused until I reach the part where Josephine is being blackmailed. She really does love Lord Grayson, which is why she tries to push Nicholas away. She wants him to break the marriage contract. If you want to break a marriage contract make sure you sleep with your fiancé’s enemy.

This is one hot and steamy romance with just enough suspense, angst and action to make an interesting plot. I am not going to do a spoiler, but the ending was not easy for me to predict. I just wish this was a longer book.

The narrator was a little dull in the first few chapters. As the story progresses she gets more inflection in her voice and improves. The character voices are very flat and then take on more life around chapter 3.. Don't give up on the audiobook.....give it a few chapters. It is worth the wait.

This audiobook was provided by the author at no cost in exchange for an unbiased review courtesy of AudiobookBlast dot com.

I think the book would be the preference

I listened to the full audio because I said I would offer an unbiased review. Unfortunately, the narrator's loud intakes of breathes throughout the piece ruined the experience.

Would you be willing to try another book from Tarah Scott? Why or why not?

Yes, I enjoy the author's writing.

too many gasps...sounded like I was being talked down to the entire time

Was Lord Grayson's Bride worth the listening time?

I liked the story, but wished I would have read it instead. It was hard to give the story higher stars