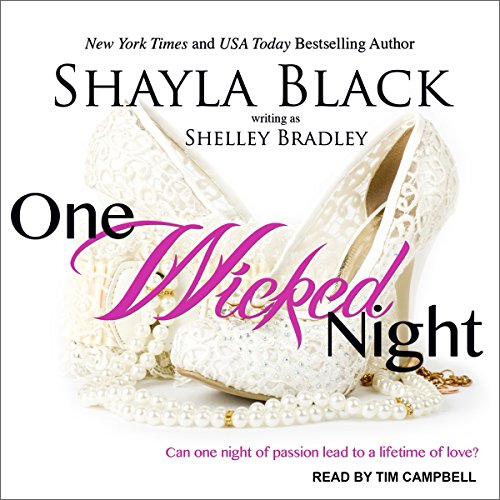 By: Shayla Black,Shelley Bradley
Narrated by: Tim Campbell
Try for £0.00

Was it one night of passion...

When Lady Serena Boyce's husband, the elderly duke of Warrington, could not give her an heir, he begged her to take a lover in order to conceive a child. She never dreamed it would mean falling in love. One look at the handsome stranger who rescued her from a thief and virginal Serena was overcome with desire. Dark and compelling, Lucien Clayborne, marquess of Daneridge, was everything her honor warned her against. Yet the anguish in his soul drew her nearer...and before the night was through, she had gifted him with her innocence

Then the duke was murdered, and Lucien discovered that Serena was pregnant. Still reeling from the death of his cherished daughter and enraged by his first wife's callous betrayals, Lucien's honor demanded he make Serena his bride. But the rapture of their one night together had unlocked feelings he thought his heart had forgotten. Now, a chilling evil threatened their chance to claim a love that promised to last a lifetime.

What listeners say about One Wicked Night

Ever read a book and ask yourself, “why does he even like her!?!” Yeah - hated Serena. I think I muttered “idiot” under my breath about a hundred times while reading. It was only a neurotic inability to leave a book unfinished that took me to the end. Possible spoiler - I hate when the whole book is discord and then in the last paragraph they get together. Ugh!!!!!!!!!!! It wasn’t literally the last paragraph. But almost.
All that said - PLEASE don’t let this influence your opinion on Shayla Black. I have given all her other books full marks. I absolutely adore her writing. It’s fun, it’s fast, it’s sexy. I guess no one is perfect. 😜

Omg really??????give someone a redeemable quality. Just one reason to like her. Nope not one. Good story despite idiot heroine