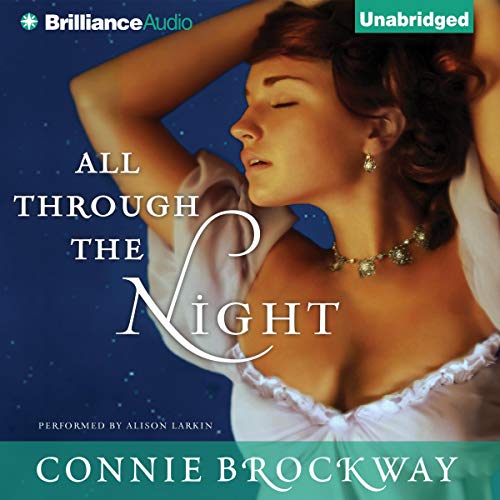 All Through the Night

By: Connie Brockway
Narrated by: Alison Larkin
Try for £0.00

A woman compelled. A man obsessed. A love that defies king and country.

In the glittering world of Regency England, Anne Wilder plays a dangerous game. A widowed lady by day, by night she becomes a masked thief preying on society's elite. She roves high above London's black rooftops, compelled by phantoms from her past to take ever greater risks. Until her restless spirit led her into Colonel Jack Seward's trap...where seduction may be her only way out.

She'd played him for a fool, taking advantage of his hungry response to escape from his clutches. But as Jack hunts for the thief, his heart falls captive to a self-possessed widow. Torn between illicit passion and tender love, Jack is duty-bound to capture the audacious criminal, even if it means ripping society apart to do so. Now, he stalked her through the ton, never realizing the lovely widow who captured his heart was the same woman who roused his most violent passions.

What listeners say about All Through the Night

I thought the story was intriguing, and I liked the character of Jack.

I've listened to a number of audios by this narrator, and while not outstanding she generally does a good job. But I think she was completely the wrong choice for this book. The hero's voice was completely wrong and it was sometimes hard to keep listening.

Do you think All Through the Night needs a follow-up book? Why or why not?

I think this is one of those books best appreciated in print.

Would be great if not for the narrator

Would you try another book from Connie Brockway and/or Alison Larkin?

As a huge fan of Connie Brockway, any new audiobook from Connie Brockway would be an automatic buy for me. But I'm very sorry: not if it's narrated by Alison Larkin again.
I read this novel some time ago and found it really wonderful. But I just couldn't finish the audiobook because of the narrator's voice.
I'm sure Alison Larkin is a nice lady, but as a narrator for romance for me she doesn't do the trick. She doesn't have the voice to narrate a sweet, sensual love story like this one. She's probably more suitable for Agatha Christies or something of the kind. Mrs. Larkin didn't give the characters any depth which I loved when reading the novel.

I was very happy that finally more of Conie Brockways books were being published as audiobooks. Dear Audible, could you please pick another narrator like Justine Eyre, Rosalyn Landor or Susan Duerden?

Dark and delicious as chocolate. A classic.

I'm a big fan of Connie Brockway's and read this years ago, but had forgotten just how lusciously sexy this book is. Apparently the rerelease in paperback (and the new Audible recording) of this and the lighter, more playful "Promise Me Heaven" are in preparation for a long-awaited third book in the series.

"All Through the Night" is unquestionably darker than the first book, with a hero and heroine who are both wounded souls and have serious trust issues. Fortunately for readers who want to like our romantic protagonists, this author has a talent for creating heroes who brood just enough, but are never downright mean.

Narrator Alison Larkin charmed me in the fluffier (but still sizzling) "Promise Me Heaven," which introduced as minor characters the heroes of both "All Through the Night" and the upcoming final book in this series. When we first met Jack Seward, he had inadvertently caused a rift between the first book's hero/heroine, and received a broken hand in retribution. This book catches up with him some years later, scarred by more than just the imperfectly mended hand. He has survived being hanged, and is described as having a permanently hoarse voice as a result; Alison Larkin voices his character with erotic élan, interpreting the throat injury with a marvelously smoky baritone.

And Seward's voice isn't all that smokes. There are some beautifully written sex scenes here, with tension built with such teasing deliberation that it's almost torture.

Five enthusiastic stars. I can hardly wait for Giles' story.

I really wanted to like this story based on the description of the storyline, but the story sometimes glossed over important details and I really didn’t like the narrator’s voice. In the end, my overall impression was, “that was a bit odd”.

narrator gets all ZEROS

Her male performance was so off putting i couldn't finish. I really wish author's wouñd pick narrator's that HELP their books, not destroy them.

The story held promise but didn't deliver. Narration was awful and at times confusing.

narration was spot on helping to enhance interesting and complex characters. entertaining story which kept my interest throughout.

Yes, the narrator. Also, the female protagonist and the way that the main characters' romance develops.

Who would you have cast as narrator instead of Alison Larkin?

Someone who doesn't make the male protagonist sound like a raspy old creeper. This is a major pet peeve of mine when female narrators make male characters sound like aged pedophiles with emphysema. I understand that Jack had some vocal chord damage that added a gravelly tone to his voice, but this narrator's portrayal was so horrendous for me that I wasn't drawn to his character or the romance, and these parts are essential for the romance genre. I also often didn't agree with the narrator's interpretation of the content and, at times, her cadence was off-putting. Completely did not work for me, which then made the book often tedious and irksome. I think I might actually like this book a little better if I read it. Alison Larkin wasn't entirely horrible, which I have experienced with narrators before, so I gave her 2 stars.

Was All Through the Night worth the listening time?

I listened to it at a faster narration speed, which made getting through it more doable.

This book wasn't painful to get through, but I definitely felt satisfied when I was able to "mark title as finished" simply because it was over. As stated earlier, that narration was pretty subpar, but other elements did not come together as they ought either. I wasn't convinced of the female protagonist's motivations, which I thought were central to her character and behaviors, and she often came off as timid and vapid when she was in her 'ton' mode. This was my first experience of this author, and I often found myself thinking, "I want to like this book," as it carried on; unfortunately, it never came around to inveigle me into liking it more. For this reason, I'll give this author one more try. The writing style is actually fairly decent; it's how the story stammers and the characterization chokes that didn't work for me. Pass this book up for a better historical romance--there are plenty out there.

If we could, my star rating for the story would be 3/4. Overall I really liked the plot and major characters. For spme reason I found the minor characters hard to keep straight and mixed them up. Normally this wouldn't be a problem but since you are sort of trying to figure out a mystery, it can be frustrating, 2nd - I read "No Place for a Dame" directly before this. Although both books can be read as stand alones, they share some of the maincharacters, "No Place. .." occurs in time after "All Through. ..", and nothing that I read in any of the descriptions mentioned this,**SPOILER ALERT**** Lastly, through out the story, I would get confused and didn't know if Jack actually knew Ann was the thief.