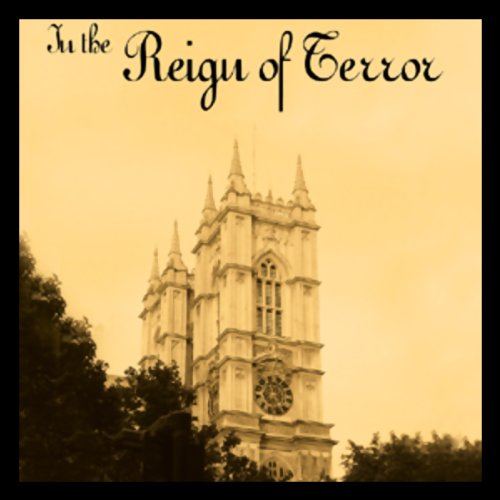 In the Reign of Terror

Harry Sandwith, a Westminster boy, becomes a resident at the chateau of a French marquis. After various adventures he accompanies the family to Paris at the height of the French Revolution. Imprisonment and death reduce their number, and Harry finds himself beset by perils with the three young daughters of the house in his charge. After narrow escapes they reach Nantes. There the girls are condemned to death in the coffin ships, but are saved by the unfailing courage of their young protector.
(P)2006 Blackstone Audiobooks

What listeners say about In the Reign of Terror

This is a great listen. Much adventure and faithfulness on the part of the main character. Good for all ages.

I love this book! I have listened to it 3 times! The reader of this audio book did a great job! The story is exciting, romantic, and has so much great tension.

10 stars gripping a must do

I totally loved this book incredibly moving and exciting written in 1858, run to get it now, I am telling everyone. Beautifully narrated too, fantastic say no more!

I’m an old girl (60) and never listen to boys adventure tales but I was riveted to this one. The historical setting, characterization and unending excitement were quite mesmerizing. At times it is a bit dated because, well, it IS dated! But that only added to the charm and exotic allure of the story. The narrator was a pleasure to listen to. His French accents were subtle and not intrusively theatrical, but just enough to lend flavor to the sauce. Never heard of Henty before in my life but I’m off to another adventure tale right after this.

This book kept me interested from beginning to end. I’d love to see this book made into a movie. Wonderful characters, terrific characters set in a historic setting. Absolutely recommend.

Would make a 5 star mivie

Some scenes as written were to my ears... a little too pedantic. Most characters could have been a little less subtle, to hold the attention of young people today*. And the narrative voice night be replaced with more action & dialogue. But courage, moderation, devotion and adventure filled the heart of this “reader”. (*Sentimentality is out of fashion?)

Reminiscent of A Tale of Two Cities, my favorite book of all time!

Very well written, a delight to the ears! I’ve found a new author to enjoy. I love the classics and this fits right in there. Very happy with this choice.

I absolutely loved this book! The plot was intense and kept me interested. great vocal performance as well, not to dull and he did a good job with changing voices so that I recognized the characters.

Excellent descriptive historical fiction!!!Most of us have only a little information on the French Revolution through school (years ago) or Les Miserables...this book awakened several aspects of what it was really like in Paris and surrounding cities at the beginning of the Revolution, middle and end. I do realize this is only 7 hours.... however, the writer has amazing perception and put me right there fighting for the good guys!! I could literally feel the tension, smell the sea air, see the dress of the period. The narrator did a superb job in all characters, and executed retoric of the time period without any confusion...I am looking for my next G. A. Henty book now!! If it's not available, I am definitely looking for an audiobook with Stuart Langton as the narrator!

Set in the aftermath of the September 2nd massacres, G.A. Henty tackles the worst of the French Revolution from the eyes of a British young man. Caught up on the wrong side of the revolution, the reader gets to watch a 18 year old boy slowly do what he must to save the family he cares so much about. Certainly the darkest Henty book I have read, but also one of my favorites. The historical perspective is certainly that of a royalist one, but captures the fear and poverty evident in France at the time, and acknowledges the errors of the aristocracy in their treatment of the third estate and how their fate came to be. Great story and well told.