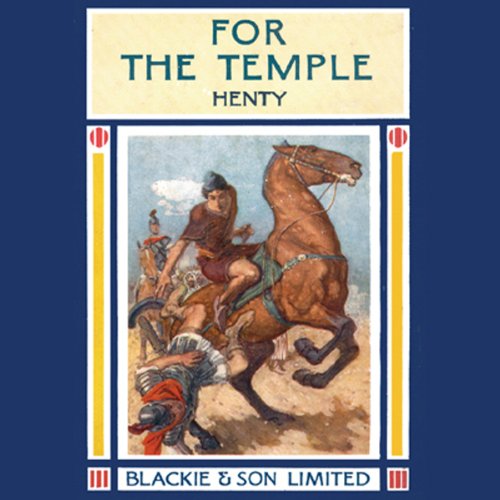 By: G. A. Henty
Narrated by: William Sutherland

In this stirring tale of the last days of the Temple at Jerusalem, robber bands and political infighting set the stage for the Roman destruction of the city in 70 A.D. In the face of overwhelming odds, John of Gamala does his best to save God's Temple, harassing Roman work parties, burning Roman camps, defending Jerusalem during the Roman siege, and even fighting Titus himself in hand-to-hand combat, forging a relationship with the Roman leader that lasts until after the war. In spite of fighting a losing battle, John keeps his integrity and honor intact.
(P)2002 Blackstone Audio Inc

This is a great book, but the person that reads the story does not change character voices very well. The book makes it worth the purchase though

Great historical fiction! This book provides great insight into the time when the Romans burned the temple in Jerusalem.

This was a great story!!! It was very entertaining and had a lot of history from the time around the fall of Jerusalem.
The narrator was just okay - so only 4stars instead of 5 ;-)

Amazing look at the the Jewish rebellion

Fantastic and intriguing story and really helps you understand what was going on at the time of the destruction of the temple.

If you close your eyes on the last 5 min of this book ( Christian doctrine ) ,it's a good story based on real historical facts.

Thus was my 3rd G.A. Henry novel and I was not disappointed. His likeable and noble characters won my loyalty from the start. Their adventures through actual events were believable and the historical knowledge I gained was fabulous.