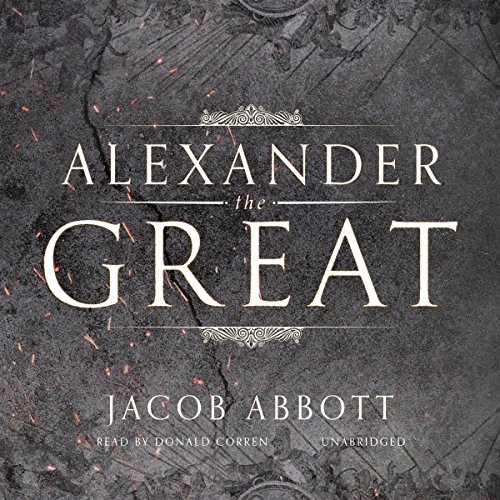 By: Jacob Abbott
Narrated by: Donald Corren
Try for £0.00

Alexander the Great is a towering figure in ancient history because of his legendary conquests throughout Europe, Asia, and Africa. He was born in 356 BC to the noble family of Macedon. As such, he was afforded with great luxuries growing up including having Aristotle as his private tutor. After his father was assassinated, he took over the throne and inherited a formidable army which he would put to tremendous use. Alexander was just in his early 20s when he embarked on an ambitious expansion of his territories.

Despite his youth, he proved to be a capable military strategist and captured nearly all the kingdoms in his path, often leading the battles himself. Even the mighty Persians who had terrorized the Greek states for centuries had been defeated by his army. He also conquered Egypt, took the title of Pharaoh, and founded the city of Alexandria. His campaigns reached as far as India and could have gone farther if not for his men's refusal to march on due to homesickness.

Despite this premature turnaround back to Macedon, he was able to consolidate most of the known world under his rule - a feat never before achieved. He caught a vicious illness on the way back and died at the age of 32 far away from his home.

This book is part of a biography series by brothers Jacob and John Abbott first published in 1876 with a few updates and revisions. It continues to be one of the best books written on Alexander the Great, his incredible conquests, his eventual downfall, and the aftermath of his death.

It is filled with fascinating details and deep insights into that period in history. Alexander's military tactics are still taught the world over and his influence lingers even after thousands of years.

What listeners say about Alexander the Great

Great little book, written in 1876. Abbott is able to bring the story to life—no doubt adding a bit of conjecture in his enthralling storytelling. Good narration as well. I wish Audible had all of Abbott’s books.