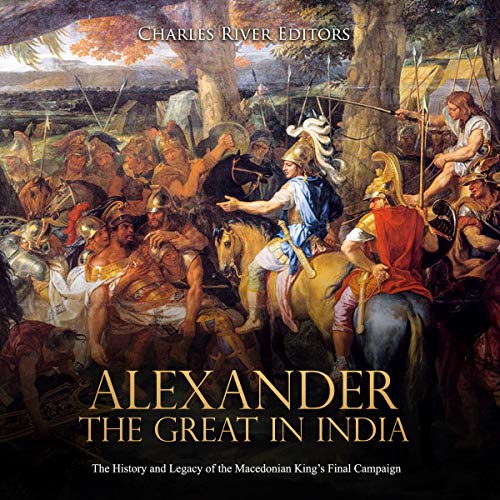 Alexander the Great in India

Over the last 2,000 years, ambitious men have dreamed of forging vast empires and attaining eternal glory in battle, but of all the conquerors who took steps toward such dreams, none were ever as successful as antiquity’s first great conqueror. Leaders of the 20th century hoped to rival Napoleon’s accomplishments, while Napoleon aimed to emulate the accomplishments of Julius Caesar. But Caesar himself found inspiration in Alexander the Great (356-323 BCE), the Macedonian king who managed to stretch an empire from Greece to the Himalayas in Asia by the age of 30. It took less than 15 years for Alexander to conquer much of the known world.

After he had finished off the Persian Empire, Alexander must have been glad to leave Persia and its adjoining provinces at his back. Alexander was planning to march onwards, into India, and had made overtures to the wild tribesmen that inhabited the region that is now Pakistan, but he had been abruptly refused. The chieftains of the hill clans who guarded the passes of the mighty Hindu Kush mountains were determined to make a fight of it, secure in the knowledge that the high passes of their domains were virtually unconquerable. Alexander, never one to accept defiance, made his preparations and, in midwinter, a season traditionally reserved for rearmament and regrouping, he began his campaign. The Aspasioi, the Guraeans and the Assakenoi, inhabitants of the rocky valleys of north-western Pakistan, all opposed him, so Alexander destroyed their fortresses one by one, determined to extinguish them. The hill clans were fierce fighters, and each fortress, small though they generally were, was only carried by storm after days of vicious fighting which resulted in grievous losses among the Macedonian ranks. To give an idea of the brutality of this conflict, Alexander himself was seriously wounded twice during two separate sieges, taking a javelin through the shoulder fighting the Aspasioi and then a spear-thrust to the ankle in the assault against the Assakenoi fortress of Massaga. His reprisal was fierce: every fortress of the hill clans that did not surrender him was razed to the ground, and its inhabitants put to the sword, to the last man.

Despite the war-weariness of his veterans and many of his generals, after having vanquished the hill tribes Alexander pressed south and east into the Punjab. There he clashed with the most powerful enemy he had encountered since he had vanquished Darius at Gaugamela, the great Indian ruler Rajah Porus, whose domains included virtually the whole Punjab and who commanded an army tens of thousands strong. Alexander’s force came face to face with Porus’s army at the Hydaspes River, in 326 BCE Despite Porus’s strong defensive position, Alexander succeeded in forcing a crossing. When Porus threw forward his war elephants, the shock element of his force, Alexander’s indomitable phalanx proved equal to the task: his men had faced war elephants before, and instead of bracing to resist their charge they opened their ranks, letting the beasts charge through, then encircled them and brought them and their riders down with their pikes. The phalanx then made short work of the lightly armoured Indian infantry, while Alexander’s Companion Cavalry and allied horsemen drove the enemy skirmishers and horsemen from the field. Porus was captured still trying to fight, and Alexander was so impressed with his bravery that he made him governor of his previous kingdom, even going so far as to grant him additional lands.

Alexander the Great in India: The History and Legacy of the Macedonian King’s Final Campaign chronicles the push east into India, the fighting that took place, and the ramifications of Alexander’s last campaign.

What listeners say about Alexander the Great in India

Good however it seem to be a struggle for the narrator to pronounce correctly some of these fairly common words and names associated Alexander and his era.Seemed also to skip/repeat sentences that were previously said.Alas still for the price it is informative and worth a listen. 4 out 5 for sure.