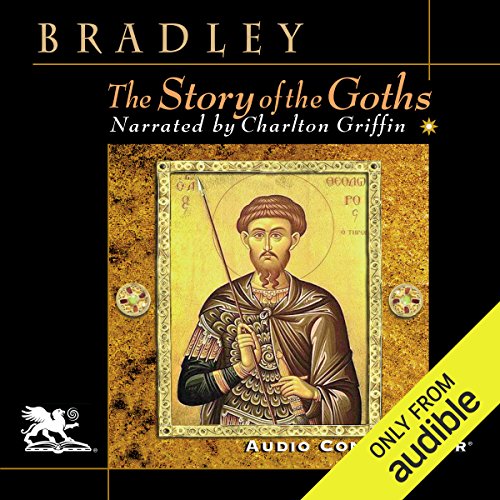 The Story of the Goths

By: Henry Bradley
Narrated by: Charlton Griffin
Try for £0.00

The Goths are the most enigmatic of all the ancient German tribes. Their name today is still widely in use for a variety of cultural and artistic movements. But unlike other famous German tribes whose names are still descriptive of nations they founded - the Franks, the Lombards, the Angles, the Saxons, and the Alemanni - the Goths simply disappeared. The subject of Henry Bradley's splendid short history is tracing the rise, the migrations, and the impact of the Goths on European history along with their spectacular fall. It is a fascinating story of courage, resilience, and dogged determination. And it is the story of some of the greatest German chieftains and kings produced before the time of Charlemagne...awesome leaders like Alaric and Theodoric. The Goths brought down the mighty Roman Empire. But before they faded away, they left an indelible imprint on our civilization.

What listeners say about The Story of the Goths

I have always enjoyed Roman history and while the Goths were major players in the latter parts of the Roman Empire, my understanding of the Goths was limited. The end of the book summarized that in a very distinct way - unlike other Teutonic Peoples like the Franks, Vandals and Burgundians, the Goths seemingly faded into the history of the peoples they conquered. In some ways they were both the cause of the end of the Western Roman Empire and paradoxically also the preservationists of the Western Roman Culture. All of the alliances and wars with the Byzantines and other powers of the day eventually drained them. They came to power in Italy under their King Theodoric, at the bidding of the Empire to defeat another group that had taken over the Italian peninsula. Constantly at war, both the Ostrogoth's and Visigoths eventually were overtaken by emerging powers. Visigothic Spain is probably the most visible evidence that can be seen today of their architecture.

Charlton Griffin is the premier narrator for this genre of history and his performance for this book is excellent. If you enjoy Roman History you will enjoy this book, it gives a different perspective on the barbarian notion that is such a pivotal aspect of Roman History.

It is an OK Listen.

An exhaustive study of the 400 years of The Gothic prominence and their interactions with The Romans, both East, and West. It filled in some "holes" in my knowledge of those times. The narration, I found a bit tedious because because of the plethora a similar sounding Gothic surnames.

I was weirded out by the book's take on history until I found out that it was written in the 19th century. So, the recurrent theme that the Goths were savages until conversion to Christianity made them civilized starts to make sense in that light. I was looking for modern scholarship. If this was made clear in the book's description, I missed it.

The narration is odd as well.

It’s a disjointed battle recounting of the first 800 years or so after Christ and the performer’s voice and accent make you feel like you’re being inoculated with the Bubonic Plague. Excellent for taking naps.

There's a lot of good information with some fun direct quotes and specific instances of history interwoven throughout the narrative. The narrator is one of my favorites and has done a lot of other history books on audible.

I will say it requires some basic knowledge of Europe to fully enjoy it. If you know absolutely nothing about European geography, you might have a hard time with this. Luckily I play many historical games and am familiar with the general layout of things. Other than that, it's a good starting point for the story of the Goths. I'd recommend a couple of other books in the Byzantine Empire and Attila the Hun to have the broader context of the events presented.

nice to understand peoples of long ago, this book is very detailed and is a good reference book

Wonderfully narrated and easy to follow. This audiobook is one of the best I have come across that covers the Goths.

I was hopeful that this book would be an enjoyable experience. I was only partially satisfied. The information contained is normally credible, but at times seems to border on conjecture trying to masquerade as fact. To be fair, this book was written over a century ago and there have been numerous historical and archaeological discoveries since then, but I was still somewhat disappointed given the widespread acclaim that Bradley enjoys as a linguist and historian- even to this day. But as with all dated academic publications- it is still important to see where the consensus used to be and how it has changed (if indeed it has).

not worth the time to listen, although the the narrator is engaging. maybe other books are better.

HOLY COW. I FEEL LIKE INVASION. OF BODY SNATCHER.

FELT LIKE BACK IN CHURCH HISTORY CLASS. FALLING ASLEEP. DESPITE GOOD READER..THESE GOTHS. HAD SO MANY PRE ENGLISH NAMES. IT'S LIKE TRYING TO FOLLOWING A STORY IN A MADE UP LANGUAGE! MOTIVES WERE ALWAYS SNATCH AND GRAB. SHOULD RENAME DARK "AND DISGUSTING" AGES