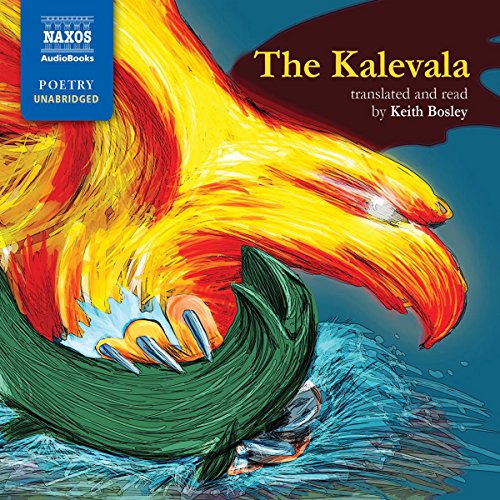 The Kalevala provides a compelling insight into the myths and folklore of Finland. Compiled by Elias Lönnrot in the 19th century, this impressive volume follows a tradition of oral storytelling that goes back some 2000 years, and it is often compared to such epic poems as Homer's Odyssey. However, The Kalevala has little in common with the culture of its Nordic neighbors: It is primarily poetic, it is mythical rather than historic, and its heroes solve their problems with magic more often than violence.

This version uses the acclaimed translation by Keith Bosley, who is one of the acknowledged experts on The Kalevala. Highly popular and accessible, his is widely regarded to be the authoritative text.

What listeners say about The Kalevala

Only one third through but I'm in no doubt I'll want all 13 hours. It's like a drug.
I almost didn't click but curiosity made me listen to the sample and I was drawn in by the sound and the imagery straight away.
Nordic noir was never so harsh and lyrical.
What a delight to realise later that the reader Keith Bosley is also the translator! Amazing job.
I would tend to get bored by folk tales and myths if the text is plodding - it takes the driving energy of poetry like this to bring such material to life and that is here in abundance.

This was Meant to be Read Aloud

Anyone who has tried to read an epic like this would do well to remember that the Kalevala was meant to be read aloud.

It doesn't surprise me that there aren't to many recordings of this epic in audio form. And as for trying to use electronic voice technology along with a read-aloud type app, I wouldn't recommend it. The electronic voices are flat, and they can't deal with the names. After a while, I'd really freak out.

Fortunately, this version of the Kalevala is narrated by someone who totally gets it. Keith Bosley is both the translator and narrator of this version. In my book, this adds to his credibility.

Not only that, Bosley brings his background in radio to this performance. It's as if he really was planning to read this thing aloud, and since he knows the language, he is able to cope with the Finnish names.

As a bonus, I have to give Naxos Audio Books high marks. Naxos always puts out quality stuff, and this recording doesn't let me down.

In short, anyone looking for a good narration of the Kalevala would do well to check out this reading.

If you could sum up The Kalevala in three words, what would they be?

That it sounded like a storyteller of the original tales might have, had they been in English--declaimed and metrical but well paced. He conveyed what must have been the real meaning of the words--which as the translator from the Finnish, he knew.

No, the original was assembled from different, though related tales by a 19th-century collector.

Where other translated folk tales seem flat, this was lively, without the sense that anything had been added to make it so.

Good introduction to the Finnish classic

So much of what can make this title good is the translation. Not only are we trying to get a sense of the Kalevala's story, which after all represents a number of popular tales in the form of poetry, woven into a reasonably comprehensive sequence. We are also trying to get a sense of the poetry and metric themselves, which are essentially games and music where the main instrument is the Finnish language itself.
Such a book can only be an introduction. The only reading that will do "justice" is the reading with notes and references that help us understand the music of the original.

Besides that, Kalevala contains the original Rap Battle, just for that I think it's a worthy listen.

The characters in this tale are truly unique. They are their own mixtures of norse and christian characters and morals.

The Kalevala has a lot of superfluous, repetitive verbosity that does nothing for the spoken narrative in English, but Maybe this work is more musical when spoken in its original Finnish. I dunno. I'm interested in mythology from just about anywhere around the globe, but the saga I've hear so far (I'm about 13 cantos in,) is pointless, nonsensical, arbitrary, and uninspiring, so I'm eagerly awaiting my next monthly credit so I can get something else to listen to. I really wanted to like the Kalevala, but it's just flat soda to me. Greek mythology is MUCH better. J. R. R. Tolkein is MUCH better. Being utterly fictional, and, therefore, without much overt practical value, mythology and fantasy are inherently worthless wheel-spinning, unless they (1) inspire one's courage to perform heroic deeds (like waking up in the morning when that infernal alarm clock goes off), (2) delight the palate due to their aesthetic magnificence, (3) reveal something interesting about the psyche of the culture from which the mythos sprang, (4) etc., but the Kalevala strikes me as accomplishing none of that. The narrator is good. He strikes me as a motivated storyteller who, with a better work to speak from, would surely spread his contagious enthusiasm for the work to his listener, but I'm just about done with this. I bet a nonfiction account of the Finnish resistance against the 1939 Soviet invasion would be far more heroically inspiring . . . search box, where are you? . . .

I grew up reading a very small sample of this saga - quest for the sampo, so I was curious about the rest of it. It did not disappoint. much like Shakespearean iambic pentameter, there is an art to reading saga poems, and the narrator did it perfectly.