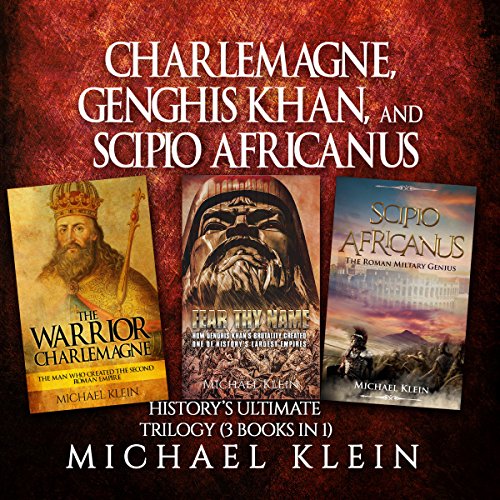 Why do we remember some rulers although they lived centuries ago, while others are just footnotes in history?

Charlemagne, while subjugating the people he conquered, modernized education, currency, art, music, and leadership to bring stability back to Europe, setting it on the path to thrive for years to come. Europe had been in upheaval, with threats from every direction, when Charlemagne came to power in the eighth century. The barbarian king worked to unite Germanic people into one kingdom and to spread Catholicism.

We remember Genghis Khan for the brutality and bloodshed left in his path as he unified Mongolia and widened the Mongolian Empire. This biography explores his life as both a benevolent unifier and leader and a horrifically violent warlord, beginning with his humble beginnings during a time of political instability. His willpower changed the world in sweepingly dramatic ways.

The last book in this trilogy focuses on the Roman military genius Publius Cornelius Scipio Africanus the Elder. He learned from Hannibal that a win by trickery is still a win and that honor on the field of battle often results in death.

What listeners say about Charlemagne, Genghis Khan, and Scipio Africanus

I couldn't tell who was ruining the story.

I couldn't tell if the books were just poorly written, or was the presentation bad. In the end I think Michael Klein and Ken Maxon have to share the blame. ...not sure what they do for a day job, but I doubt it's writing books and reading them out loud.