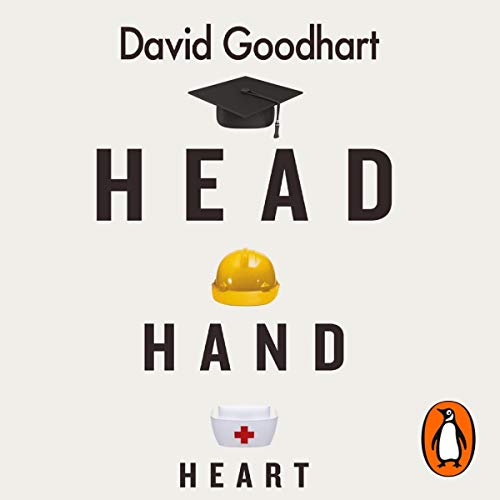 A good society needs a balance between aptitudes relating to head (cognitive), hand (manual/craft) and heart (caring/emotional). In recent decades in Western societies, they have got out of kilter. One form of human aptitude - cognitive ability - has become the gold standard of human esteem.

The cognitive class now shapes society and largely in its own interests: in the knowledge economy, the over-expansion of higher education and in the very idea of a successful life. To put it bluntly: smart people have become too powerful.

David Goodhart, who in his last book described the divide between the worldviews of the Anywheres and Somewheres, now reveals the story of a cognitive takeover that has gathered pace in the past 40 years.

As recently as the 1970s most people left school without qualifications, now in the UK almost 40 per cent of jobs are graduate-only. He shows how we are now reaching 'Peak Head' as the knowledge economy needs fewer knowledge workers, yet there is a crisis of recruitment in caring jobs.

A democratic society that wants to avoid widespread disaffection must respect and reward a broad range of achievement covering both cognitive and non-cognitive aptitudes and must provide meaning and value for people who cannot or do not want to achieve in the classroom and professional career market. This is the story of the struggle for status and dignity in the 21st century.

David Goodhart latest book ploughs, in greater depth, furrow ploughed by Nassim Taleb and Peter Thiel in challenging the conventional wisdom that university education is a universal panacea for all society's ills. whereas Taleb attacks the transparent idiocy emerging from e academy, goodhart's perspective is more structural Colin that while university has a roll, it is singularly unsuited for for the occasional training for craft and social care occupations, yet entry into these callings also is increasingly being framed by requirements for university qualification.

I've struggled all my working life to get ahead in the qualification meritocracy, to the great loss of my hand and particularly heart skills. This book is s justification and an urgent call to readjust holistically on a society wide basis.

I found this an incredibly lucid and balanced argument. I suspected from the start that I would agree with Goodhart’s overall perspective but found some welcome challenges to my own prior thinking along the way - especially in terms the role of a liberal arts education. It was nice to have my mind changed on some important issues. The book avoids polemic and is admirably non-partisan as far as party politics is concerned. Found myself bookmarking some excellent sound bytes to pass on as my own in future conversations. I was also impressed, given the book’s pithy title and premise, with the author’s resistance to discussing the relative merits of heart jobs, head jobs and...