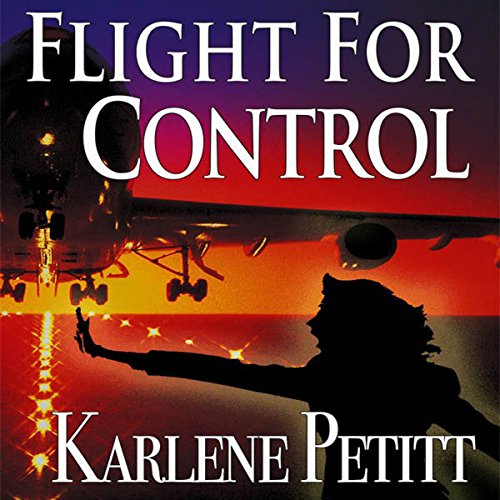 After a ten-year leave, Kathryn Jacobs has been invited back to the N.T.S.B to investigate a series of unexplained airline crashes. But her husband, Captain Bill Jacobs, has his concerns. While her twin daughters are off at camp, and Bill is actively campaigning for the Pilot Union Presidency, Kathryn secretly begins her investigation. What she learns will shock the nation.

Flight For Control is a thriller that reads like a mystery. But to Kathryn, there is no mystery on the condition of the airline industry - it’s broken. Planes are crashing. Pensions are lost. Pilots are financially and emotionally bankrupt due to fatigue, furloughs, and loss of seniority.

It’s time that someone takes control before it’s too late - unless it already is.

Your life is in your pilot’s hands. Do you know who’s flying your plane

What listeners say about Flight for Control

Thriller with a Steely Woman Pilot as Gumshoe

Karlene Petitt is a self-published author, and veteran pilot, who I discovered in an airport bookstore and in-flight magazine. She is a total firecracker, and has a great pilot-detective series starting with Flight for Control.

This is fun thriller, and is engaging to listen to. The protagonist, Kathryn Jacobs, has steely resolve and is going to crack the conspiracy she discovers-- if it kills her!

"Your life is in your pilot's hands. Do you know who's flying your plane?"

What did you love best about Flight for Control?

I liked that the author used real aviation issues to fuel a hopefully far fetched story. I also like that there were enough details in the book to satisfy me as an accident investigation and airplane nut while not going over the head the average passenger. If you are afraid to fly this might not help you out. But, if you like gaining some insight into the issues that plague the discussions of those in the pointy end of the plane this is a must read!

What was one of the most memorable moments of Flight for Control?

The cinematic climax was a gut-wrenching. Be prepared to cry. I kid you not!

What does Dina Pearlman bring to the story that you wouldn’t experience if you just read the book?

Listening to Miss Pearlman's reading helped me see the characters in way that I couldn't if I were just reading the text. As usual the is an Audible Production and adds a lot of value to the words on the page!

If you could take any character from Flight for Control out to dinner, who would it be and why?

Darby. She is strong, witty and a darn good pilot! Sadly, I don't think she would want anything to do with me

Give this book a chance even if you aren't an airplane geek! It's very much worth it! You can tell that this is Mrs Petitt first novel. But, honestly, that works in the books favor more often than not. I just wish that the cause of the crashes weren't raveled till the main character makes the discovery. I also wish that there could have been a few parts that placed the charterers at the accidents scenes doing onsite analysis. Still, it's a great story and you will learn a lot about aviation while enjoying the story!

As a Pilot I feel some of thing, you would never do but was interesting book to listen to with a feel good ending.

Writer is a longtime airline pilot who knows her stuff, but only gets a little preachy. First rate story with fresh ideas, interesting characters and much suspense.

Can be a little preachy at times, but gets to the bottom of how the decline of the once-great airlines affects the people who work for them. Good melodrama, flow and great cliffhanger.

Narrator's regional accent was, at times, a distraction, but she moved the story along well.

This should absolutely be made into a movie. Story's that good.

This was my second time listening to it.