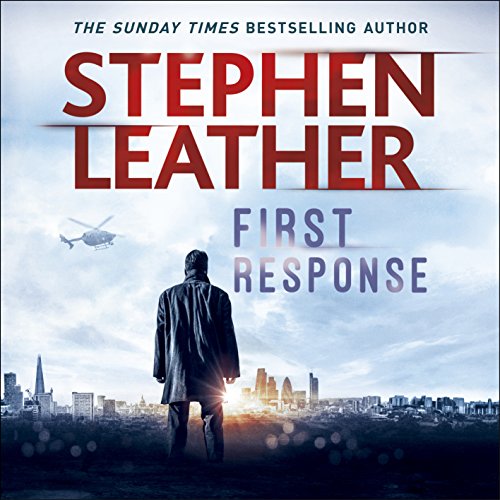 From best-selling writer Stephen Leather comes an utterly addictive all-action thriller in which a huge terrorist threat to the capital can only be stopped by one man.

From the best-selling author of the Spider Shepherd and Jack Nightingale series comes First Response, the utterly addictive new thriller by Stephen Leather.

London is under siege.

Nine men in suicide vests primed to explode hold hostages in nine different locations around the city, and are ready to die for their cause.

Their mission: to force the government to release jihadist prisoners from Belmarsh Prison.

But the bombers are cleanskins, terrorists with no obvious link to any group, and who do not appear on any anti-terror watch list. What has brought them together on this one day to act in this way?

Mo Kamran is the Superintendent in charge of the Special Crime and Operations branch of the Met. As the disaster unfolds and the SAS, armed police, and other emergency services rush to the scenes, he is tasked with preventing the biggest terrorist outrage the capital has ever known.

But nothing is what it seems. And only Kamran has the big picture. Will anyone believe him?

A chillingly plausible and pulse-pounding depiction of how London might be held to ransom in a concerted terrorist attack: this is thriller writing at its very best.

What listeners say about First Response

Stunning and so expertly narrated. Oh the pace

What a book, i read the reviews and was convinced but they did not do justice to what i heard.
The slow clinical pace of the narration was brilliant and actually built the tension. It was almost presented as a rolling news event.
I can't say anything about it as almost any comment could be a spoiler. Suffice to say you will be kept guessing.
this was my first Leather novel, it will not be may last.
Full marks to Paul Thornley. I truly don't believe this book could be as good to read as it was to listen to. I may try sometime
Give this one a go

This book was interesting from start to finish. The storyline was really good and narration was excellent. I would suggest this story to all my friends and family. I chose to give it this writing because there was nothing I didn't like.

Best listen for a long time

This was a brilliant story. It kept me captivated throughout and I didn't see the final twist coming until the last moments..

It was made all the more believable by some great narration.

Not much happens with a weak twist. Plot points are unintelligent and conversation is plodding and obvious. Performance is a good effort with some attempts at accents.

I found the story line very depressing, 9 characters all going through the same situation, so the same story repeated 9 times. There was a bit of a twist at the end but It was so obvious I guessed it would end like it did from a quarter of the way through the book. Not brilliant in my opinion

The story is pretty straightforward. The writing is quite basic and the author uses the same phrases and descriptions over and over. I was hoping for some action, and the buildup suggests there will be some, and then... there isn't. The narrator also has quite a halting style which i find hard to be absorbed by. I did finish the book, and it was alright. But only 3 stars. I probably won't buy another Leather book, and will probably avoid Thornley as well.

Rather dull and repetitive

Downloaded this because I wanted something to listen to in the car in a long journey. The premise sounds good but it is so repetitive and the plot in the end was just dull. A missed opportunity to write something fast-paced and relevant.

Best story in a long time.

First listen to this author.
Very impressed.
Looking forward to next in the series. .

My first Stephen Leather book away from the Dan shepherd books but read again by Paul Thornley. It's a good book with a character from the sas books coming up. Enjoyed it but not as much as others. Hard to say about the story as it would give it away but well worth a go.