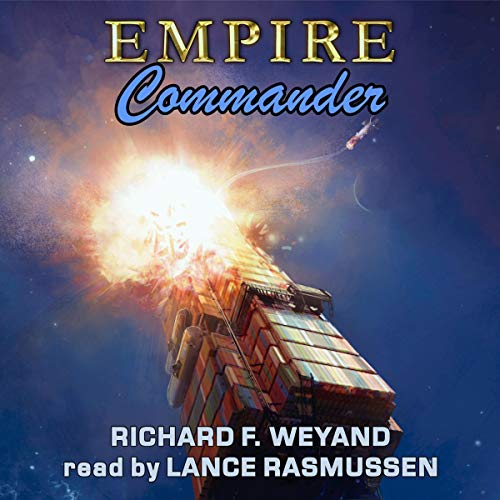 Emperor Trajan is building a powerful new navy for the Sintaran Empire. Remotely piloted warships can accelerate faster than humans can withstand, and ships spend so much time in hyperspace, a single crew can man multiple ships, solving the perennial manpower problem.

But even with the help of a genius young team of design engineers, there’s a lot of work to do to even get to the point of building new ships. It will take years, years the emperor may not have. Someone’s causing trouble, and war is coming.

Will the empire’s new navy be ready in time? This is the fourth book of the Empire Series.

The first trilogy of Empire pretty much left everything in order. What happens in the second trilogy?

A. The first trilogy dealt with domestic issues, particularly corruption, which affected everything from the courts to military procurement, from who got promoted in the military to who got what commercial monopolies in the economy. The attempt to end that is what pushed the Council crisis and led to Bobby Dunham as emperor. Now, Sintar is being successful, its economy unleashed. Other nations are unhappy with that success and begin to cause trouble.

And that trouble is going to get out of hand?

What is Empire: Commander about?

Bobby Dunham - Emperor Trajan - takes over the military as commander-in-chief. The military will no longer be run out of the bureaucracy. He's a military man, an officer, and a combat veteran. He also knows to let the commanders do their jobs. His job is policy. He makes several important policy decisions, and we see where those go.

Does military technology play a role in Empire: Commander?

Yes, a big role. The empire, under the emperor's leadership, makes major changes in how it designs, purchases, and uses its warships. This is at the emperor's direction, and is enabled by a young team of very able engineers and designers. They remake the Imperial Navy.

So, we have some people causing trouble, and the empire bringing up new technology at the same time?

Yes. It's a bit of a race. Will the Empire have its new navy in place before it needs it?

You've taken another turn with regard to covers in this second trilogy.

Yes. Empire covers are all drawings, as opposed to photographs. Where the first trilogy's covers were portraits of the empresses and emperor, the second trilogy's covers are all of spaceships, and depict events in the books. James Lewis-Vines, another brilliant artist in the UK, is doing the spaceship covers, because my artist on the first trilogy, Aaron Griffin, is a portraitist, and he felt James could do a better job with the spaceship art.

How long did Empire: Commander take to write?

All of the Empire books are taking five to six weeks to write, for 80,000 words. I have to finish it while I can still hold the whole book in my head, or progress would slow down drastically. I would have to go back and read the whole thing over all the time to remind myself of where I was.

But you do read them eventually, right?

How much re-work and re-write do you do on your first draft?

None. I'll straighten out a clumsy sentence structure or pick a better word somewhere as I read it, but otherwise, what you are reading is my first draft.