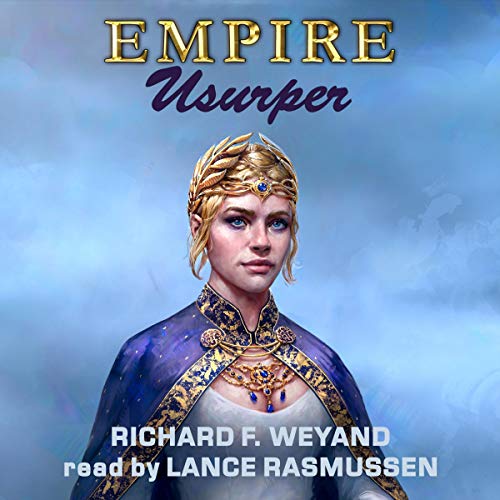 THE REFORMS MUST CONTINUE

At the age of 27, Deanna Dunham Garrity has become the Empress of Sintar, absolute ruler of 150,000 worlds and their 300 trillion inhabitants. She would continue the reforms of her predecessor, but the Imperal Council stands in her way.

How intractable will the Council be? How hard are they willing to push back to maintain their graft and corruption? Will the confrontation turn violent? And if it does, will the new Empress and her loyalists be able to prevail against the Council?

And what of the Empire? Can even the sweeping Sintaran Empire survive the confrontation?

The new series by the author of CHILDERS.

This is the second book of EMPIRE.

How long did it take to write EMPIRE: Usurper?
About 55 days. Normally, I can write a novel in a month or so, averaging 2000 to 2500 words per day. I only averaged 1400 words a day on EMPIRE: Usurper, because it has a lot of moving parts, and because I didn't take a month off after completing it. I sort of took my time writing it instead.

What's the basic plotline?
Deanna becomes Empress of Sintar at age 27. We followed her in the first book, how she was cured of this terrible disease by Imperial medicine, how she got a scholarship to university, and how she became the Empress' assistant in trying to reform the corrupt bureaucracy. She feels she owes, literally, her whole life to the Empire, and she is determined to do right by it. This book follows her efforts to continue and step up her predecessor's reforms, against the plotting and machinations of the bureaucracy.

Does the confrontation between Throne and Council turn violent?
Yes, and that's all I'll say about it. Major spoilers are possible.

Is there anything controversial in EMPIRE: Usurper?
We would find their justice system strange. They have police, and courts, and rights of evidence, trial by jury, and all the rest, just as most Western countries do. That is the system of low justice. But the sovereign, in this case the Empress, also has a system of high justice. She can find anyone guilty of crimes against the Throne. She is judge, jury, and executioner. That is likely to be strange for someone raised on Western values.

What about the cover?
That’s another incredible original artwork by Aaron Griffin, an exceptional young artist in the UK I found via the net. It depicts Deanna - now the Empress Ilithyia II - on the day of her coronation. The storm clouds gathering behind her are emblematic of the coming conflict.

What comes next in EMPIRE?
The Throne strikes back against the Council. The Throne must prevail for the Empire to survive.