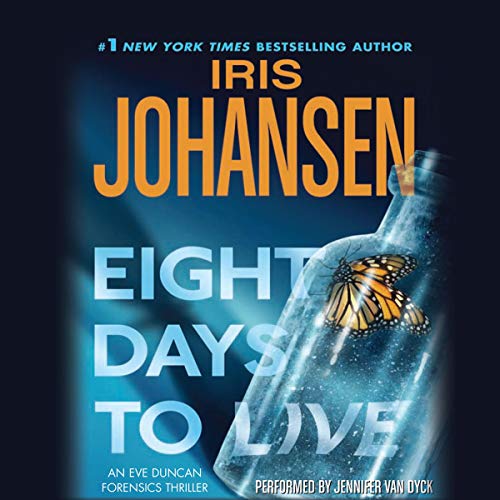 It all begins with a painting called Guilt. Eve Duncan’s daughter, Jane, has no idea why she painted the portrait of the chilling face that now hangs in a Paris gallery. But the members of a cult that dates back to the time of Christ know both the face and the significance behind it. They believe that Jane must die - when the moment is right, and not an instant before she leads them to an ancient treasure whose value and power are beyond price. But for now, they target those close to her - killing without mercy or conscience.

Jane’s journey takes her from Paris to Scotland to a cave in the Holy Land, as she fights with all she has to save her life. Even with Eve’s help, can she possibly escape before the clock stops ticking?

Eight Days to Live begins with an ancient conspiracy and a shocking betrayal, but will it end with the death of Eve Duncan and the sacrifice of Jane MacGuire? With Eight Days to Live, number-one New York Times best-selling author Iris Johansen delivers a thriller that will chill you to the core.

What listeners say about Eight Days to Live

PRO: Good entertainment for a long-distance drive. This thriller novel was well paced in the abridged version. CON: The accents of the different characters started to get confusing. I had a difficult time reconciling the male protagonist's high-pitched voice/accent with descriptions of his manliness.