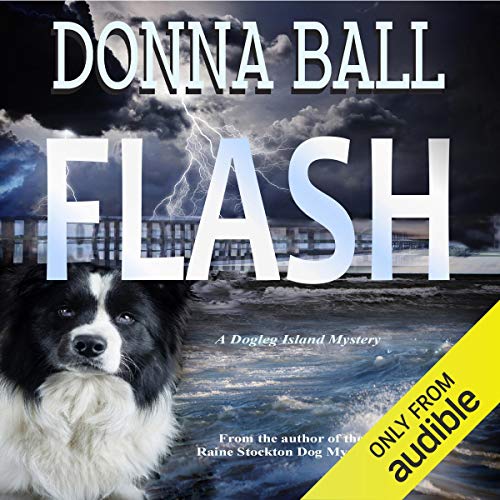 Aggie Malone is a dedicated young cop who has spent her entire life just looking for a place to call home. She never thought she'd find it in a quaint Florida village called Dogleg Island, where almost nothing ever happens.

Deputy Ryan Grady is an easygoing playboy who carries a surf board in the trunk of his patrol car and lives in the same rambling beach cottage his grandfather built 70 years ago. He grew up on Dogleg Island and can't imagine ever living anywhere else. It's always been the most peaceful place he has ever known.

Flash is a black and white, blue eyed border collie with amazing powers of perception, recollection, and deduction. He was born to be nothing more than a pampered family pet, however, and his skills might never have been uncovered.

A single night of blood and terror changed the lives of these three forever, and forged a bond between them that nothing will ever break. While each of them struggles to deal with the scars left by that night, they must also bring a killer to justice - a killer who is also stalking them. And only Flash knows who it is.

What listeners say about Flash

the narrator sounded very similar in cadence and pitch to the Raine Stockton series narrator but this story was very different. I absolutely loved the excerpts about modern dog studies and dog facts. I also really loved that some parts are told from the dog's perspective. as a border collie caretaker myself, I chuckled frequently at the authenticity of border collie traits and behaviors. It's clear that the author is well acquainted with border collies herself. This is a fantastic new series and I'm looking forward to the next installment!

This was a really good, engaging story. It is well-written, suspenseful without causing extreme blood pressure hike. The reader, however, was completely devoid of inflection or emotion - almost like someone asked her to see how long she could read in monotone. I am now going on the hunt for more books by this author, not the reader. Feel bad saying it

I like the story a lot, especially the parts from Flashes perspective. But the reader is often sing songy and flat at others.

I started reading the book but my declining eyesight resulted in the need to purchase the audiobook. The narrator's voice is flat, dull and emotionless. She ruined the story.

Narrator will make a story. Not a fun listen.

Story may be good, but the narrator spoiled the experience

I cannot say I like the story, because the narrator was not engaging.

The storyline is twisted as s grapevine. Great read. I accidentally read out of order and it didn't even matter. Love this series. Hoping book three comes soon.

Can't wait for the next Flash audiobook for

It only took a few minutes of listening to Flash and I knew this was a special story. You feel connected to the people & place. The narrator sounds so genuine in how she tells the story, really brings them to life. Thank you Donna Ball for another great mystery. I really hope you continue with Flash, Aggie, Grady & the rest of group. Right up there with The Raine Stockton Mysteries.

I especially liked the amount of information about dogs included. I plan on listening to her other books.

I hope that she continues the series

Great book, Interesting information about Border Collies. like the location and the characters. The idea of having a bullet left in your brain is interesting and makes the story unusual.