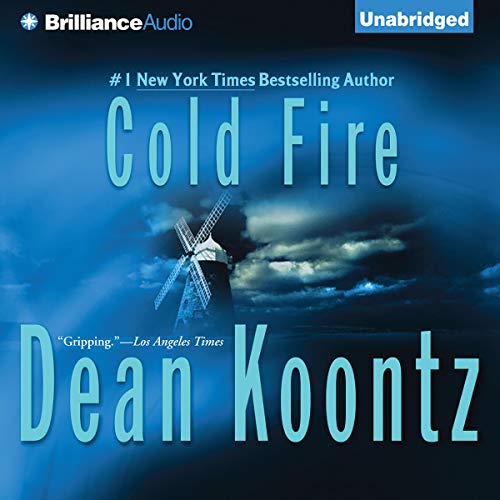 By: Dean Koontz
Narrated by: Carol Cowan,Michael Hanson
Try for £0.00

Reporter Holly Thorne is intrigued by Jim Ironheart, who has saved 12 lives in the past three months. Holly wants to know what kind of power drives him, why terrifying visions of a churning windmill haunt his dreams, and just what he means when he whispers in his sleep that an enemy who will kill everyone is coming.
©2004 Dean Koontz (P)2004 Brilliance Audio
Horror
Show More Show Less

What listeners say about Cold Fire

Started off intriguing and interesting, but unfortunately for me became drawn out, unimaginative and boring.

It should have been a great story but it just didn't mesh. I kept at it, listening until the end, even though, frankly I found myself bored about half way thru. I didn't buy the romance between Holly and Jim and the anger that kept popping up seemed contrived as though Jim's rage was something he was told to display and not what he actually felt.

I don't normally give one star ratings because very few books elicit such a strong reaction as to make me feel as though I've wasted my time but this was a book that could have been so good. Perhaps if Koontz had either gone the religious route or the alien route and then settled on the reality, the reader would have felt a sense of nightmare, discovery, and healing. Instead Koontz had the character and thus the reader barely (key word here, BARELY) examine the core beliefs of religon and alien ideology, like skimming thru a thick medical book and then going, ok, here's the answer--now you're cured.

None of it felt real.

And neither did Holly or Jim or the world of "Cold Fire".

Carol Cowan's performance was fine but Michael Hanson sounded snobbish...lol, perhaps, HE was bored with the book.

Narrator's distracted from the story...

I thought both the narrator's sounded too old for the parts they played. They sounded like they were in their 60's, not 30's. It was a distraction for me. Also, after a while the story seemed repetitive and became boring. Certainly not his best works.

Koontz at his worst

I have enjoyed over 20 Koontz books. This one I could not even finish, by far the worst book of his I have read. The narration was fantastic, which goes to show how poor the story was. There was nothing to keep my interest, the characters were boring and the "enemy" was just very lame. It's hard to believe he can go from By the Light of the Moon, which I think is his very best work, to this garbage. Even hardcore Koontz fans should skip this one.

I usually enjoy Mr. Koontz's books and indeed, I think I would enjoy this one if I had read it instead of listening to it. It isn't his best book - I think Odd Thomas is my favorite - but the two readers of Cold Fire really got in the way of my enjoyment.

Maybe I've just been spoiled by listening to Neil Gaiman read his own books and by John Slattery read Duma Key. In any case, I can't really recommend listening to this one. There are better books to spend your credits or money on.

Cold Fire is a pleasant little Koontz. It has good amount of weirdness and two nice primary characters. There are not as many developed characters as I like in a great Koontz novel and there is no dog (bummer). There are really only 2 and a half characters, which is unusual for Koontz. Not one of the greats but above average Koontz.

Good story and I liked that it swapped between narrators, however just felt maybe could have been slightly better presented somehow?

I have listened to hundreds of titles as I drive several hours every day and have finished them all, even the really rotten stories. This story is really rotten, but what kills the book is the narrators. They take a really rotten story and make it unbearable. I simply could not make it to the end. For once, I can say I do not know how a book ended, and I don't care! I got a good ways through -- all the way to the point in the tower -- but could listen no more. It is an indictment on the quality of the story that I have no inclination to find out how it ended. koontz's The Critic was 3x the book this one was, and that is not saying much.

As always this story kept me on my toes from start to finish. Stellar twist at the end!

The female Narrator needs another cigarette

The female narrator sounds like she smokes a pack a day. Her part is too abrasive and antagonistic. Started out as a great story but the reporter made it to hard to listen to. I am a Koontz fan but this is not his best.

Dean koontz is a master of mind challenging books

Would you listen to Cold Fire again? Why?

Yes, this is by far my favorite author who just takes on an amazing journey into the extremes of the mind. Read all his books.