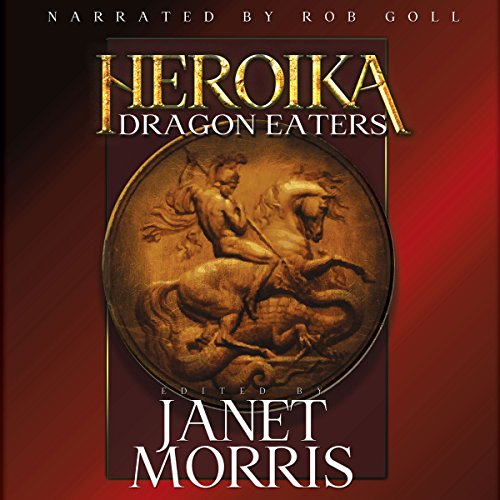 The art of dragon killing: Dragons have been eating humans for centuries. Now heroes throughout history stalk their legendary foe. Learn how to hunt, kill, and eat the wild dragon. Never before has revenge tasted so good. A literary feast for the bloody-minded.

What listeners say about Dragon Eaters

A superb tale of dragons.

HEROIKA 1: DRAGON EATERS takes you on a quest of bravery and legends never before encountered. The realistic details crafted by these writers are amazing and eating wild dragon is a disturbed but welcomed vision for the hunters of mythology and fantasy.

Eagerly anticipating the next installment.

Getting even with the beasts that overpowered us

What did you love best about Dragon Eaters?

These tales are about getting even with the beasts that have been overpowering us for so long. Prepare yourself to run wild: enjoy adventure, risk, and the “fetid smell” of dragons in the heat of battle. Meet Zombie dragons, vampire dwarves, elves, and animated skeletons. Awaken to the ways in which fear triggers bravery.

I read quite a number of books by Janet Morris and Chris Morris, loved the exquisite writing style, and appreciated the detailed expertise in weaponry and horse riding skills that enrich their work (garnered over a lifelong experience.) They are truly inventive in creating carefully defined rules of a universe shared between a team of authors. Here, they define the thrust of this anthology using a long stretch of time: “Now heroes throughout history stalk their legendary foe.”

Have you listened to any of Rob Goll’s other performances before? How does this one compare?

The voice artist, Rob Goll, a UK trained classical actor, has a warm Baritone voice. He embodies the characters in these stories with great conviction, giving each one of them a compelling sense of truth as they travel through a fanciful universe. The rich literary language of this anthology may be a challenge for many voice artists, but this is where he excels. His storytelling is both precise and engaging, as he seems drawn to the dark side, carrying us there with him through drama and adventure.

Looking at his YouTube channel I noticed that Dracula was an experiment for him to see whether he fancied being an audiobook narrator. Many of his other audiobooks are in a similar vein: Dragon Dreams: The Chronicles of Shadow and Light by Dusty Lynn Holloway, and Tales of Erana: The Warrior's Curse by Alexandra Butcher.

HEROIKA I allows me to learn about the team of authors and their varied storytelling skills. Each one of them has a biography rich with contradictions, across which imagination may be sparked:

S. E. Lindberg, Two decades of practicing chemistry, combined with a passion for the Sword and Sorcery genre. Jack William Finley has been a cook, an actor, a stunt man, a photographer, built computer hard drives, assembled ball bearings, delivered pizza, stocked shelves, wrapped wire and been a Soldier for the United States Army in Germany. Travis Ludvigson, a Warrior Poet who spent his life reading the histories of both real and imagined worlds, the ideas of ancient philosophers and the sagas of the Norse warriors. Tom Barczak, an Artist, turned Architect, who's finally getting around to finishing those stories he started writing long ago, when he sat on my front porch as a kid. JP Wilder, son of a farmer, a dishwasher, projectionist, paratrooper, Army scout, student, frat guy (of sorts), roofer, plumber (but not a very good one), grad student (twice-cooked), professor (Adjunct really), accountant, husband, executive, author, father. Joe Bonadonna, author of short stories, novels, and screenplays, a former rock and roll guitarist and songwriter from the Golden Age of 1964-1984. Milton John Davis, a chemist who enjoys his passion for writing, M. Harold Page, who wrote an earlier book inspired by a conversation with his son, who asked, “Daddy, how did the Roman Empire fall?” Alexandra Butcher. William Hiles. Walter Rhein, who splits his time between Wisconsin and Peru. Cas Peace, a folks song writer & performer whose first career was as a horse-riding instructor. Beth Waggoner Patterson. Bruce Durham, who writes history, young adult, post-apocalyptic, alt-historical and Lovecraftian horror, in addition to graphic novels.

Very rarely an anthology comes along which has not one weak link, Heroika is that anthology. Seventeen stories by diverse writers in a multitude of genres with one theme in common: Dragon hunting! These are tales of the primordial power of the dragon and the heroes and heroines who face their fears to make their world safe. Here there is steampunk, historical, mythological and more. High quality writing which touches on the motivation, fear and grittiness of the Dragon Hunter (and Dragon Eater as some stories show the age-old maxim of gaining the enemy’s strength through eating them).

This audiobook is narrated and performed by Rob Goll who does an amazing job with the different accents, accents not just from different areas of the world and fantasy world, but accents from different historical periods as well. His classical theatrical talent lends itself toward perfect timing and the ability to effectively portray the emotions of the Dragon Hunters and in some cases the Dragons themselves.

It is hard to pick a favorite, I loved all of the stories in their own special way. If I had to pick it would be La Betaille by Beth W. Patterson. This is the story of a little Cajun girl, Pichou (yes, Mr. Goll does a wonderful, believable accent here), who stands up to her fear in the face of the threat to her world.

I highly recommend this compellingly written and narrated anthology. As J.R.R. Tolkien’s famous quote said: “So comes snow after fire, and even dragons have their endings.” Yes, they have their endings, but each story is a joy to experience.

Heroika was edited by Janet Morris