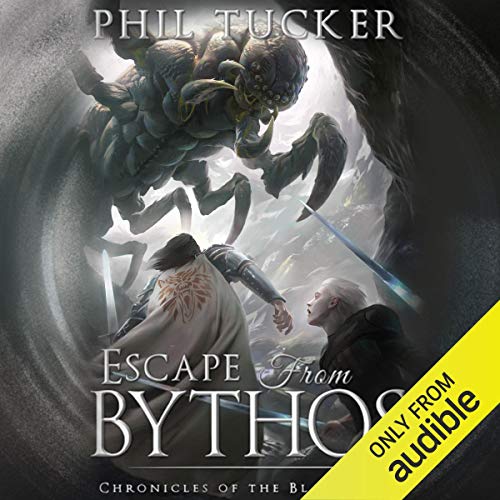 While listed as book 6, Escape from Bythos is actually the prequel novella to the series and can be enjoyed at any point.

How did Asho end up as Lord Kyferin's squire?

Escape from Bythos leads seamlessly into the novel The Path of Flames, detailing how Asho acquired his freedom against all odds and escaped the slave city of Bythos.

All Ennoian knights must sacrifice a single year of their lives to garrison the subterranean city of Bythos. Known as their Black Year, it is a time both loathed and dreaded. Lord Kyferin, the infamous leader of the Black Wolves, is down in the depths with six of his knights. Biding his time. Whoring. Dreaming of bloody invasions he'll launch when he is free to return to Ennoia.

Then a Bythian slave brings word of dangerous prey. A legendary monster. A cavekiller. Kyferin chooses to mount a hunt, taking a fraction of the men needed so as to increase his glory. This cavekiller, however, is different. More lethal. Ferocious. And the Bythian slave that Kyferin brings as a guide is none other than Asho's father....

What listeners say about Escape from Bythos

This story felt like I needed a lot more information to enjoy. It was clearly an attempt to pull me into a greater series, but it was just a bunch of names and places and words that I had no context for and quite frankly, didn’t enjoy.

I really enjoyed this story , i actually found myself laughing out loud when he was trying to work out what the best gift would be .

Great short story introduction into this series by the author the narration was excellent! Will check out the rest for sure!

Escape from Bythos
By: Phil Tucker
Narrated by: Noah Michael Levine
Series: Chronicles of the Black Gate, Book 0.5
This is a short story about morals, courage, right and wrong, slave and master, a cave dwelling monster, and fate. It is short but has a lot thrown in there! It has all this and more!
The narrator has the perfect voice for this story!

Engaging intro to this series.

Bythos is a slave city, the bottom (subterranean) of the classes in the Ascendant Empire. Zekko is a worker who has lived under the oppressive regime wondering how his gods can allow this system. Zekko’s children, Asho and his younger sister Shaya, will soon be of age to face the Choosing process where they will be evaluated to be sent to a life of servitude in the next level or contemned to remain as a slave in Bythos.

The children seek adventure by going into a forbidden mine, where legends tell of a killing monster, the cavekiller. They are frightened back to their father to let him know that there is a living cavekiller deep in the shaft. This will require action by the Ennoian knights who are serving their year in the loathed city. Zekko seeks out Lord Kyferin who agrees to take a small force to face the cavekiller even though legends indicate that only a large group of fighters should face the monster. Kyferin directs Zekko to be the guide into the depths of the mine.

Zekko has been approached by his work friends who are recruiting to rebel against the higher realms. This has pushed Zekko into a mindset of confusion and he has to contemplate his faith and tradition. He has choices to make as he could lead the knights with protective or deadly motives. When they face the battle, Zekko makes a sacrifice that will change his life and the lives of his family.

I know (knew) nothing about this series but I like fantasies with class battles and dangerous creatures. This is a short novella that explains how Asho ends up where he is for the following books. The characters were well developed, and the world building was displayed through the lifestyles and actions of the characters. I found the story engaging and I would be willing to listen to more in the series.

Audio Notes: Noah Michael Levine does a nice job with the narration. He portrays the characters with appropriate voices and emotion. The audio enhanced my enjoyment of the story.

Escape from Bythos [Chronicles of the Black Gate]

I prefer to listen to books in published order. I completed this excellent short story after finishing the series, Chronicles of the Black Gate. However, this book can be completed where ever the listener prefers. There are no spoilers in this book to ruin the other books in the series.

The story is a plus to the series, giving a bit of background to some of the main characters.

Noah Michael Levine does a fine job with the narration.

Narration was too robotic

The story is good, but the narrator is very robotic between dialogs, and its hard to engage in the story when it's read off like Microsoft Sam.

I loved this story but couldn't stand the way it was being read. If it wasn't for the action it would have felt like a very long clear eyes commercial.

quick listen for a free book. nothing of any important but it was enjoyable non the less.

Some people have dull conversations, perfunctorily fight a monster, and then have longer, more boring conversations. Perhaps if any of them had personalities beyond “groveling slave” and “vulgar warlord” I might’ve been able to summon an interest.

Narrator does his best with mediocre material.