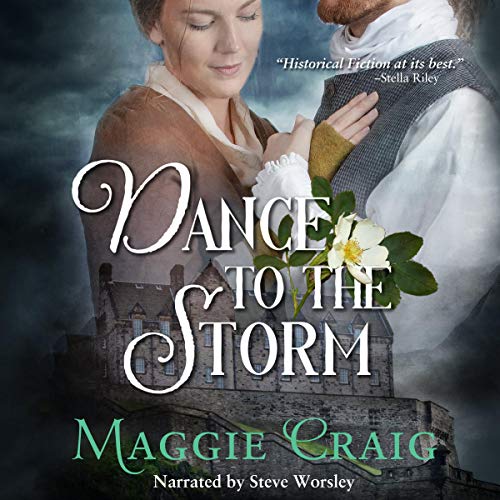 Dance to the Storm

By: Maggie Craig
Narrated by: Steve Worsley
Try for £0.00

Edinburgh, December 1743: Redcoat Captain Robert Catto is between the Devil and the deep blue sea. His investigations have turned up compelling evidence of a real threat posed to the House of Hanover by a plan to restore the House of Stuart to the British throne. His duty is to draw out as many Jacobites as he can find in Scotland's capital and gather evidence against them, their names to be handed over to Duncan Forbes of Culloden, Lord President of the Court of Session, and Catto's mentor. Two of those dedicated Jacobite plotters are Patrick Rankeillor, surgeon-apothecary, and his daughter Christian Rankeillor. Yet with every day that passes and despite their very different and deeply held views, Robert and Christian are falling ever more deeply in love. How is he to reconcile doing his duty with his feelings for Christian Rankeillor?

What listeners say about Dance to the Storm

Maggie Craig is a delight!

Maggie Craig is a delight!
Dance to the Storm by Maggie Craig
Narrated by Steve Worsley
Maggie Craig was already a great favourite of mine well before I read Gathering Storm. the first in her Storm over Scotland series (released in 2013). For various reasons there has been more than six years between the two books but finally my not so patient wait has been rewarded. Book two, Dance to the Storm, is here and it’s exquisite. I have once again been transported back to eighteenth century Edinburgh, walking the snow-covered cobbled streets and back alleys with Maggie Craig as my guide and feeling to my bones the tension and intrigue of those tumultuous times. It’s entrancing from the first word to the last.

Redcoat and Captain of the Town Guard Robert Catto and Jacobite Christian (Kirsty) Rankeillor are on opposing sides of a politically divided Scotland, but share a common goal - they both love their country and its people. Both feel as though they have the right of it but Maggie Craig shows us in her unbiased presentation of the historical facts, why attempting to bring the Stuarts back to Scotland would (and did) cause a bloody civil war, with many lives lost. However, Captain Robert Catto is a realist; an engineer and career soldier, he has seen some bloody atrocities in his young life. Duty and honour is the only code he lives by, until he falls for the beautiful, brave and proud, Kirsty Rankeillor, who ought to be his enemy but who has placed him, albeit unintentionally, in the middle of an impossible dilemma. For the first time since his mother died he is compelled to protect someone else at all costs. He can’t contemplate his countrymen - but most especially the woman he loves - having to suffer the cruel acts of barbaric degradation he witnessed in Europe during his army career, and can never, ever forget. Robert knows, with unswerving certainty, what will happen should the Scottish people rise against German Geordie and the House of Hanover.

The events of Dance to the Storm take place over barely a week and follow on directly from the end of Gathering Storm, but the story is so packed full of illicit plotting, diabolical deeds and intrigue that the background political story remains fascinating and absorbing throughout. The attraction between Kirsty and Catto was apparent in the first book, even when they were at loggerheads, but the author has done a fantastic job in further developing their characters and ongoing love story to a point where I was totally invested in them and cared about what happens to them. Both have similar character traits; they’re strong and loyal, and neither suffers fools gladly which makes for some interesting clashes of personality. Robert, however, has been alone for years, and as a result resorts to sarcasm and short temper to hide his insecurities. Kirsty, on the other hand, has known nothing but love and protection from her doting father, Professor Patrick Rankeillor, one of the city’s eminent physicians, and although she’s a strong, working woman who gives respect only where it’s due, she also has a soft and caring side - a perfect foil for the irascible Robert Catto, and a balm to his love-starved soul. In fact, these two are made for each other... if only.

Maggie Craig tells us her story in a way that’s simple to understand. Quirky, loveable, sometimes despicable and often humorous, her characters fairly jump off the page. She makes me want to know more; she’s the inspirational history teacher you wish you’d had at school. She knows and loves her subject; her career as a highly respected and noted historian, speaker and successful author of both fiction and non-fiction is testament to that, so is it any wonder that she’s such a popular and much-loved lady in her native Scotland?

To go into too much plot detail about either book would be to give too much away, especially as there is a clever twist at the end of Gathering Storm I had not seen coming; I would hate to spoil the enjoyment for any new listeners of the series. But also, although they’re listed as stand-alone stories, I’d strongly advise that the two books be read in sequence. There’s so much wonderful historical detail and in-depth character building in both books that I envy anyone who has yet to discover Maggie Craig and the pleasure that awaits them. Meanwhile, I’m waiting, with great anticipation, for the release of Storm Tossed Moon and hopefully Robert’s solution to his and Kirsty’s dilemma.

All of Ms. Craig’s books are available in audio format, which is lucky for me as I’m a fan of listening and reading at the same time. She used a different narrator for the first book but decided that, on reflection, a different type of voice was needed to portray Robert Catto. She went to great lengths to find someone who could do justice to her words and the character, and found him in Steve Worsley. His voice is as smooth and warm as silk, and he enunciates each word perfectly whilst keeping the narrative separate and clearly defined from the dialogue of the large cast of characters. In fact, I’d like to employ him to record my shopping list - shopping would no longer be a chore if I had his voice in my ear.

Having been away from Scotland for many years, Robert Catto, has a cultured English accent with a Scottish inflection, he’s commanding but sexy and there’s never any doubt when he has entered the arena - he dominates every scene he’s in. Capturing the captain’s irascibility, sarcasm and often quicksilver changes in mood was, I imagine, no easy job, but Steve Worsley nails it. There’s quite a lot of inner musings going on here, with Robert fighting with himself over what he knows to be his duty over his love for Kirsty. This is where Maggie Craig reveals a softer, kinder and very decent side to him; he’s always been one of my favourite historical male fictional characters and now, thanks to this performer I have a voice to put to the author’s description of him - tall, long dark hair, grey eyed, handsome... and he’s in uniform - what’s not to drool over?

The rest of the characters are many and varied: old, young, male and female, so quite a mixed bag for this performer. One in particular, Robert Catto’s sergeant, Livingston, hails originally from the highlands of Scotland where the dialect is softer and more lyrical. I particularly like this character; he stands out in both books, and Steve Worsley has only reinforced what I imagined he might sound like. Ms. Craig’s phenomenal historical scholarship, eloquent writing, wit and humour coupled with this performer’s skill in interpreting her words brings the whole fascinating and colourful cast of characters of Dance to the Storm to vivid, sparkling life. A wonderful partnership of both author and performer, this is an audiobook I highly recommended.
Note: this book has a cliffhanger ending, to be resolved in the final book in the trilogy.