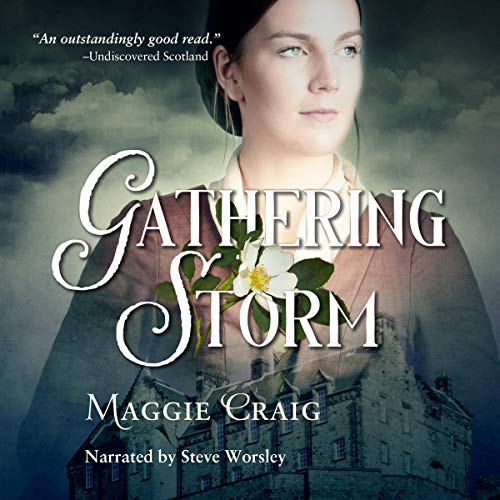 By: Maggie Craig
Narrated by: Steve Worsley
Try for £0.00

Jacobite intrigue and romance in 18th-century Edinburgh: history, mystery, and love across the political divide.

Edinburgh, Yuletide 1743, and Redcoat Captain Robert Catto would rather be anywhere else on earth than Scotland. Seconded back from the wars in Europe to command the city's town guard, he fears his covert mission to assess the strength of the Jacobite threat will force him to confront the past he tries so hard to forget.

Christian Rankeillor, her surgeon-apothecary father, and his apprentice, Jamie Buchan of Balnamoon, are committed supporters of the Stuart Cause. They're hiding a Jacobite agent with a price on his head in Edinburgh Royal Infirmary: a hanging offense.

Meeting as enemies, Robert and Kirsty are thrown together as allies by their desire to help Geordie and Alice Smart, young runaways from Cosmo Liddell, bored and brutal aristocrat and coal owner.

Gathering Storm brings to life a time when Scotland stood at a crossroads in her history, and is the first in a suite of Jacobite novels by Scottish writer and historian Maggie Craig, author of the ground-breaking and acclaimed Damn' Rebel Bitches: The Women of the '45 and Bare-Arsed Banditti: The Men of the 45.

The Storm over Scotland series are stand-alones, but follow the story of Christian Rankeillor and Robert Catto as their two very different worlds collide.

What listeners say about Gathering Storm

This magnificent, fast paced, brilliantly researched novel of 18th century Edinburgh is packed full of political intrigue, conspiracy, deception, diabolical deeds, murder, and even a hint of secret dissections. A fascinating, intriguing story with a beautifully crafted, reluctant romance between two worthy opponents, and I adored every minute of it.

This story is about people on opposite sides of a divided Scotland, each side believing passionately in their cause - the Jacobites determined to win independence for Scotland no matter the cost, committed supporters of the Stuart cause, and their opponents, the soldiers and politicians of the English crown, equally resolute and tenacious in their determination.

As well as her unsurpassed and accurately researched historical content, Ms.Craig can always be relied upon to transport her readers to time and place - atmosphere is a byword of her eloquent writing. I could hear the click of boots on the cobbled streets as the soldiers of the Town Guard marched through the echoey, empty, dank and dark roadway on their way to the Royal Infirmary in search of their prey...

“Robert Catto swept out through the Bristol Port and wheeled left. Adjusting his steadying grip on the hilt of his sword, he proceeded to cover the newly-cobbled causeway behind Edinburgh University at a fast and loping stride.”…and…”Bringing his right hand up to the side of his head, he splayed his long fingers so everyone would be sure of seeing the signal to stop. As he came to a graceful halt, spinning round on the balls of his feet to face the men, the soft folds of his cloak billowed out around him.”

Redcoat officer, Robert Catto of the despised Town Guard, has been summoned from front-line duty in Europe and promoted to Captain by the Lord President, Duncan Forbes of Culloden. Culloden is a humane and honourable man whose main agenda is the peace and prosperity of his beloved Scotland. The reluctant Robert Catto’s mission is to discreetly assess the strength of the Jacobite threat in his position as Captain of the Town Guard.

Much of the intrigue is centred around Edinburgh’s Royal Infirmary where Christian (Kirsty) Rankeillor lives and works with her father, a well-respected Professor, surgeon and apothecary. They are Jacobite sympathisers along with Professor Rankeillor’s apprentice, Jamie Buchan of Balnamoon. Robert Catto is aware that unlawful dissections are taking place in the dead of night in the Infirmary and uses this knowledge as a cover to enter and search the premises for his real prey - the agent he suspects is being hidden there. Captain Catto finds some evidence of a clandestine meeting but is too late to apprehend the high profile Jacobite agent. Duty bound to root out this traitor, Robert Catto will stop at nothing to quickly and ruthlessly carry out his unpalatable task, and then to leave his homeland for ever.

A growing but unwanted attraction begins to develop between Robert and Kirsty as they are thrown together more and more in Catto’s determined quest to find the Jacobite agent, and Kirsty’s equal determination to thwart him at every turn. Despite his irascible and sarcastic manner towards her, Kirsty is still drawn to the charismatic but lonely man she senses the Captain to be. And he is lonely. He’s a young man who carries deep and dark memories he cannot erase, not only of his mysterious past but also of the reality of war which he has seen and experienced at first hand, and fervently wishes the idealistic people of Scotland, in particular Kirsty, will avoid.

I love Robert’s character - on the surface fierce, sarcastic and tough, but with an honourable streak a mile wide and a tender nature he takes great care to hide. He is no chocolate box hero though; he’s a man of his time and does and says things that will shock. But we are privy to his innermost thoughts too, which are, at times, dark and shocking but they also give glimpses of the honourable young man beneath his outer cynical and jaded demeanour. Robert has met his match in the beautiful, feisty and loyal Kirsty; gently bred she may be, but she’s no shrinking violet having had an unorthodox upbringing. Her father has treated her as an equal and she is no stranger to the sick, the dead, nor even the dissecting of bodies for the improvement of medical science. The growing attraction between these two young and very able combatants is apparent, but does not overshadow the serious subject - that of Scotland at a possible crossroads in her history. The star crossed, would-be lovers have a lot to overcome with their vastly differing beliefs on what is right for Scotland, and Ms.Craig presents their opinions in her usual unbiased manner. Her fictional and non-fictional characters blend so seamlessly that it is difficult to discern who lived and who didn’t without googling... which I did a lot of. Let’s just say that I have a wee soft spot for the nonfictional character of Duncan Forbes of Culloden and a huge one for the fictional Robert Catto!

There are many twists and turns, with the death of a young prostitute, bestial behaviour by some of Edinburgh’s young, wealthy and spoilt aristocrats, political intrigue and clandestine meetings, all of which combine to make this a thoroughly enjoyable, intriguing, and fascinating story. Maggie Craig is a historian of repute as well as a talented writer and fabulous storyteller - her meticulous research and love of her homeland clearly shows. I have read the much lauded and highly popular first two Outlander novels, and it’s difficult not to compare the two writers. The fact that Gathering Storm has been written by a Scot, who knows her subject by studying, living and breathing it, is obvious. Even the language used could only have been written by someone in the habit of hearing and using this vernacular herself day after day.

Storm over Scotland, the next book in this series, has now been published and we see more of Kirsty and Robert after the shocking identity of the Jacobite agent is revealed at the end of this first book. The third and final book in the series, Storm Tossed Moon, is currently being written and I’m very much looking forward to reading it.

Ms. Craig has chosen to have Gathering Storm re-recorded by the highly talented actor Steve Worsley, who I’ve previously heard narrate the crime novels of Stuart MacBride. It’s our gain that he has agreed to become the voice of the delicious Robert and company, because his velvety tones and talents are perfect. IMO it could only have been a Scottish actor who could interpret and deliver the subtle differences in the many and varied dialects present in Maggie Craig’s wonderful story. Mr. Worsley delivers a flawless performance with aplomb, switching between the vast cast of characters with ease.

Performing the outwardly irascible, sarcastic and impatient Robert Catto at his worst must, I think, be an actors dream. But he also expertly and flawlessly switches between the quicksilver changes of mood in the unpredictable Robert. It takes only a slight lowering of voice and intonation, and the world weary young soldier disappears revealing a more vulnerable young man. Then, with a slight lowering in voice and an almost imperceptible change in tone, and without the need for explanation, we are aware that Robert is indulging in his inner musings, once more worrying and voicing his misgivings and concerns to himself as to how the whole situation might implode - how Scotland and Kirsty might suffer. And as his unwilling feelings for Kirsty Rankeillor become deeper, his worries intensify and his deep concern at the unthinkable outcome should she be discovered in the clandestine activities he suspects her of.

Professor Rankeillor, Kirsty’s father is a fine example of Steve Worsley’s vocal talents and versatility. The professor is a man of letters, compassionate to his fellow man and protective of his daughter, colleagues and household. He’s also no fool; he has at one point in the story to hide behind a drunken charade in an attempt to fool the haughty young Captain Catto as to his whereabouts. Steve Worsley does a sterling job in carrying out this particular scene, adopting an older facade - the air is fraught with tension as he carries out a conversation between Kirsty, Robert, Jamie and the professor. But one of my very favourite scenes is a flashback in which we hear the Professor patiently explaining the facts of life to his motherless, eleven year old daughter. Mr. Worsley imbues an embarrassed but determined Rankeillor with a fatherly tenderness which actually brings tears to the eyes as a young and childish Kirsty asks questions of her squirming father; Kirsty, used to her father’s straight talking, is fascinated by his anatomically accurate description of hypothetical events that she may, in the future, have to contend with. The Professor’s embarrassment is clear, but it’s a particularly moving piece of work and the narrator voices the very young and curious Kirsty with a sweet and childish lilt to her voice, as she earnestly questions him about his revelations.

There are too many characters to mention individually but I can only urge anyone who has not experienced Maggie Craig’s fabulous Storm over Scotland series to hesitate no longer. Both Gathering Storm and Dance to the Storm are available in e format, print and audio. Storm Tossed Moon is forthcoming and I can hardly wait for the final book which will complete this wonderful trilogy. Maggie Craig and Steve Worsley are a fabulous team and I cannot recommend the two audio books in this series so far highly enough. If you haven’t yet sampled the fabulous writing of Scottish historian Maggie Craig, please do, because you’re in for a treat and you won’t be disappointed.