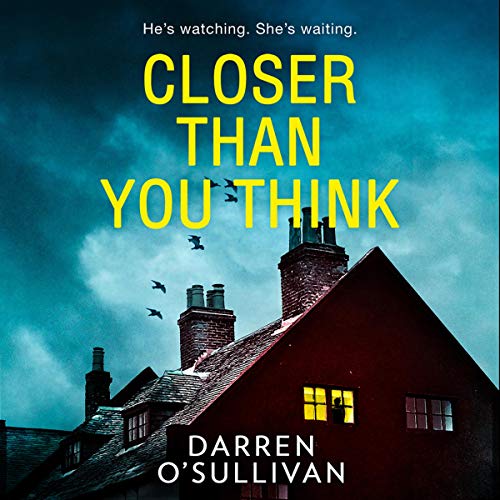 Closer Than You Think

By: Darren O’Sullivan
Narrated by: Avena Wallace,Darren O'Sullivan
Try for £0.00

The unmissable new thriller from Darren O’Sullivan, author of Our Little Secret and Close Your Eyes.

Having barely escaped the clutches of a serial killer, Claire Moore has struggled to rebuild her life. After her terrifying encounter with the man the media dubbed The Black-Out Killer, she became an overnight celebrity: a symbol of hope and survival in the face of pure evil. And then the killings stopped.

Now 10 years have passed, and Claire remains traumatised by her brush with death. Though she has a loving and supportive family around her, what happened that night continues to haunt her still.

Just when things are starting to improve, there is a power cut; a house fire; another victim found killed in the same way as before.

The Black-Out Killer is back. And he’s coming for Claire....

Praise for Darren O’Sullivan: "An immensely talented new author." (John Marrs, author of The One and When You Disappeared)

"Engrossing, compelling and twisty from the first page to the shocking ending. This book grabbed me and didn't let go." (Michele Campbell, author of It’s Always the Husband)

"Unique and utterly compelling. This twisty psychological thriller will chill you to the bones." (Gemma Metcalfe, author of Trust Me)

What listeners say about Closer Than You Think

Farfetched. Silly. Annoying. Slow. Struggled with this one. Didn't engage me. The ending was annoying.

This is a well read audioBook, both narrators made the book come to life. The touch of menace in the voice of Darren O'Sullivan made the killer really believable. Then the slight sound of vulnerability from a young woman trying to rebuild her life after ten years of being afraid of the darkness
was fantastic.

Oh my god what can I say. I truly thought I had worked it out how wrong I was a heart in mouth rollercoaster ride.

Loved the book and exceptional ending. Loved all his books and looking forward to more

Awesome! Captivating! Easily a must read! Darren O'Sullivan has become my favorite author. His twists and turns are brilliant!

I really enjoyed the performance of this book and it’s twist! My husband did guess the end mid book which I told him he was crazy and then laughed so hard during the ending. This is my first O’Sullivan book and I will listen to another.