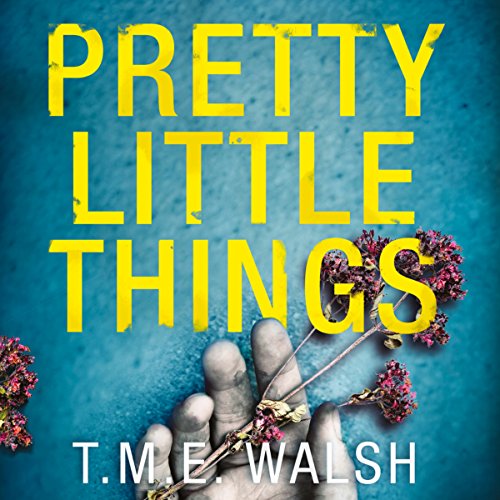 It’s worse when the girls are found.

Six months ago, Charlotte almost lost everything. Now, she’s determined to keep her daughter, Elle, safe. So when local girls close to Elle in age and appearance begin to go missing, it’s her worst nightmare.

Charlotte’s fears are confirmed when a frantic search becomes a shocking murder investigation. The girls’ bodies have been found - half-buried, and with traces of mud and wildflowers under their fingernails.

As Charlotte’s obsession with keeping her daughter close pushes her marriage to the brink, local DI Madeleine Wood embarks on a gruelling search for the killer. And, as they dig deeper into the lives of the people they call friends and neighbours, they uncover secrets more terrible than they ever imagined....

Pretty Little Things is the nail-bitingly terrifying new serial killer thriller from TME Walsh - the perfect listen for fans of Close to Home, Behind Her Eyes and The Child.

"I couldn't wait to turn the next page - brilliant and what an amazing twist!" (Donna Maguire on For All Our Sins)

"Held me captivated from page 1. Gripping, fast - I just couldn't put it down." (Martha Brindley, The Principle of Evil)

As much gore as Santa's Grotto...

'I can hear Ian getting out of the van, his footsteps heading towards the front door. He's not finished with the van...'

Above is only a sample, and there are a lot more, such as using he paused, she paused, in the same sentence. With a decent edit, it would be a short story.

Long winded, unbelievable, laughable police procedure, plus, the main character is so stupid it's annoying.

Don't believe the hype, the story has as much gore as Santas Grotto. If you like something with teeth, decent police procedure and well-constructed characters, try Helen Fields or TF Muir. As an extra bonus, their novels are well edited :)

Unfortunately I found myself skipping chapters and struggled to finish the book. I found the main character somewhat self indulgent and annoying. Too much repetitiveness and slow unfolding of the story and the characters were shallow, which made it difficult to connect to them. This one wasn,t for me. Pity as there was a reasonable twist at the end.

i didnt want it to end! but loved the ending too! i spent the whole book trying to guess the killer but what a plot twist that was.

I enjoyed this book at the beginning and in general but as it went on the shortening of Charlotte's name to Char became really irritating. The same with the daughter's name Ell . Was it short for Ellie? L is all she is called and again I found this jarring on me. The ending was predictable.

i really struggled to finish this book, the 'twist' was obvious from chapter one, the red herrings were glaringly obvious and there were many continuity errors and it was filled with nonsense that was just there to move the plot along, despite it actually making no real sense. The sub-plot was also hugely predictable, the whole book was unoriginal and was clearly designed to shock, contrived drivel. Very disappointed and would definitely not recommend.

So many twists and turns, exciting, with a refreshing unexpected ending,
Definitely recommended, a must read (well listen)

A little slow to get going but what a story.....good audio and convincing characters...... excellent

I can't get my head around this story, I've persevered until chapter 67 but giving up now. what a load of tosh! I've listened to some of the authors other books which were excellent. This one is not to my taste at all.

Loved it, kept me on the edge of my seat.
Twists and turns. Excellent narration.