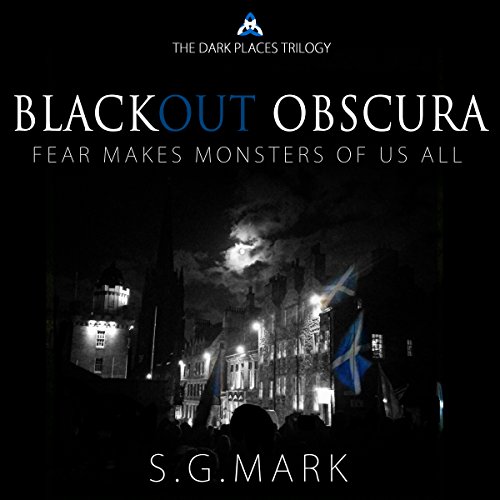 Society is broken, lying in the rubble of a global economic crash. Unemployment, suspicion and terrorism are interwoven like threads in a tapestry. On a dark night in Edinburgh, an explosion rocks Jack's world to the core and he is soon enveloped into the shadowy fringes of the law as he seeks to discover the truth behind what happened. Confronting the culture of fear that has evolved in the country fraught with terrorism and rioting, Jack faces the brutality and prejudice of the new United Kingdom as well as keeping his own disturbing past from surfacing: a secret that could lead to an even darker future.

What listeners say about Blackout Obscura

Where does Blackout Obscura rank among all the audiobooks you’ve listened to so far?

What other book might you compare Blackout Obscura to, and why?

What does Guy Kelly bring to the story that you wouldn’t experience if you had only read the book?

Cant wait for the next instalment

Set in a dilapidated Edinburgh post financial meltdown, this book quickly captures your attention and has you empathising with the character of Jack and the life he leads. The author paints a vivid picture of his life using gritty language along with a very descriptive narration, so real you feel you are living there with him. A compelling listen right from the very first chapter and I would highly recommend this book.

Not your traditional post-apocalyptic story

Blackout Obscura written S.G. Mark narrated by Guy Kelly. The story is set in Edinburgh, Scotland after a global economic collapse. People are on limited food ration cards, jobs are in short supply, and families forced to take in lodgers in their home to supplement their incomes. This is how Jack meets his new family Liza, Alex, and Maggie. Not everyone in the country is happy with the way the system is set up. There are terrorist organizations working against the government and its strangled hold and its citizens.

Jack is a man with a hidden past that he keeps from everyone. He works at a postal sorting Center. Jack has few friends but he gets by. his life is a dull routine day after day. The family he lives with provides plenty of drama to keep him busy and entertained. The most recent bombing shakes him to his core because Alex was at the place that was bombed. The country is in a dark place, with a tightening of restrictions.

Alex is a reporter for one of the country’s newspapers. The country is moving in a very dark direction as Jack can easily see after being falsely arrested by one of the government’s antiterrorist police units. He is only released with the help of Alex. The terror he experiences at the hands of the officers who wrongly interrogated him and held him for over 12 hours completely changes his views of the government and those that are taken into custody. Jack is also treated completely different by his coworkers because he was taken into custody even though he was not charged. In this new world perception is the reality. You are guilty until proven innocent.

This is not a traditional post-apocalyptic audiobook. It probably the most realistic look at what a slow economic collapse would like on the scale of the countries in the United Kingdom. This is a more human story showing the frailty of the human condition. How people would turn on each other during the collapse because of the starvation, the paranoia, and the belief that someone else had more than them at that they had the right to it.

The audiobook does an excellent job of holding the listener’s attention. There is a lot of drama and interpersonal struggle and strife to keep the listener glued to their headphones. The thought of a collapse like this happening in the United States is very daunting. The interpersonal struggles of the characters did become a bit tedious at times to hear. The setting of the book in the UK makes for some interesting character choices some listeners may have trouble relating to how these characters interrelate. There is less action overall than most post-apocalyptic fiction but it does not detract from the overall story. The story is character-driven and centers for on Jack and his secrets and the effect of those secrets on everyone around him.

Guy Kelly provides the narration for this audiobook. This is the first time I have heard a performance from Mr. Kelly. I very much enjoyed his performance and would enjoy listening to more of his audio performances. Mr. Kelly fully brought these characters to life and made the listener feel the wretchedness of the world these characters lived in. I was able to empathize with Jack and understand how horrible his world was and his choices he made to try to make a better life for himself even at the cost his choices made for others. The production value of this was good there very no noticeable noise or defects and the multiple books switched seamlessly.