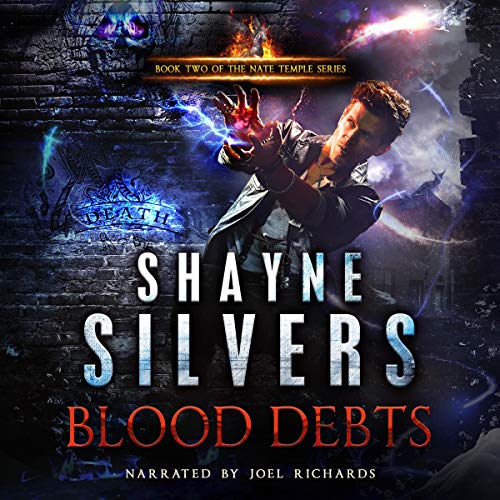 By: Shayne Silvers
Narrated by: Joel Richards
Try for £0.00

A Wizard, an Angel, and a Horseman of the Apocalypse walk into a bar…

The ancient pact between mankind, heaven, and hell has been broken, and Nate Temple’s quest for vengeance may have just kicked off Armageddon. So, time to grab a stiff drink…or maybe four.

Already plagued with sinister night terrors that could qualify him as a card-carrying psychopathic insomniac, Nate can barely even manage to put on his pants in the morning, let alone pick teams for the Apocalypse.

But when he’s framed as a demon sympathizer, condemned by the Armies of Heaven, and hunted down by both his allies and the Four Horsemen, this wizard doesn’t think it can get any worse.

Then, they take away his magic. And a wizard without magic stands no chance against the forces of heaven and hell.

Mardi Gras in St. Louis is really going to suck this year.

What listeners say about Blood Debts

I really liked the first book and I liked the first book in Feathers and Fire but I'm struggling with this one. Nate's relationship with Indie is frankly ridiculous. You go from them just hooking up in the first book to her being the love of his life in this one and suddenly she feels that she should know everything about his world just because they've screwed around a few times? She's a Regular and, even if she's been training with a dragon shifter and a cop, she has no chance in hell against a "Freak". Why does she feel entitled to know and why would Nate roll over and agree that she was totally right and he was an idiot. She gave him an ultimatum. Ugh! I hate people who do that. I love you but... if you don't bend to my demands, we can't be together.

This isn't all on Indie though. Like I said, Nate was a pushover about it and then spent the next few chapters throwing a guilt trip/pity party while all his friends basically agreed that he sucked.

That on top of the bad guys being juvenile and basically throwing hissy fits when Nate, again, doesn't bend over for them despite the fact that he doesn't know what anyone is talking about... it's really a frustrating book. "Give me the Armory!" "I can't. I don't know where it is and, even if I did a I don't know how to get in." "Give it to me!" "I can't!" GIVE IT TO ME OR I'LL CURSE YOU!!!" "I don't have the Armory." "I curse you. You brought this on yourself." ..... seriously.

This book and author is so good you just can't quit listening to the story.