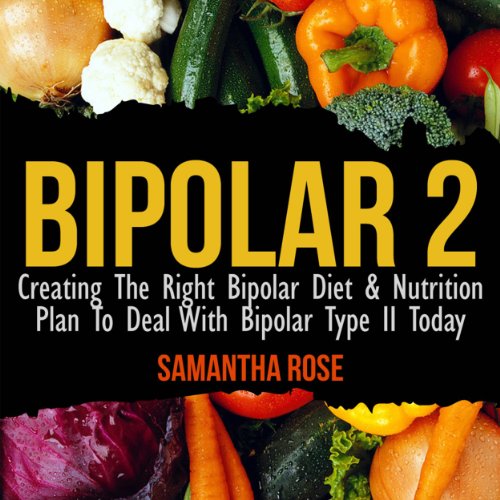 By: Heather Rose
Narrated by: Stefanie Jones
Try for £0.00

You may not know this but Bipolar Type 2 is one of the most common mental disorders, which people suffer from these days. Due to symptoms being less severe, many refer to it as "soft bipolar". Yet, even though the symptoms associated with type 2 are less intense, it can still have a detrimental effect on the quality of life for the sufferer.

In fact, they often find it extremely troubling as they have the classic symptoms of bipolar type 1. They can be subject to serious and recurring bouts of depression, along with more subtle bipolar symptoms such as periods of irritability, confusion, impulsiveness and agitation. When bipolar type 2 sufferers have a manic episode, it is usually milder so rather than being hyperactive, they tend to feel more energized and happier. Due to this, they do not suffer the terrible repercussions of a full-blown manic episode.

However, it is worth saying that even though the symptoms are less severe they still need the right course of medication and therapy so they are able to take control of their illness. If they do not, then there is a chance their condition can become worse, which could have serious consequences.

What listeners say about Bipolar Type 2

This book is very interesting.
I've learned that by eating and eliminating certain foods, you can control mood swings and other negative feelings such as irritability, intolerance to social activities and lack of interest in hobbies that were enjoyed in the past.
I recommend this book to those suffering from bipolar disorder as well as for those who interact on a regular basis with the bipolar patient such as family, friends, co workers, etc.
I hope my recommendation helps others.

The information about the diet is repeated several times. The last two chapters could be just one, the content is the same, just written in a different way.

Facts are not always accurate

Find it hard to listen to this book as the person reading it sounds like she’s lecturing in the conversation that she’s having with the reader she states certain things I guess read from the book that are in accurate or misleading one sentence in particular starts with they are three chemicals in the brain and then she list for chemicals in the brain things like this make it hard to read books that are supposed in for me therefore I can’t even finish reading this book.