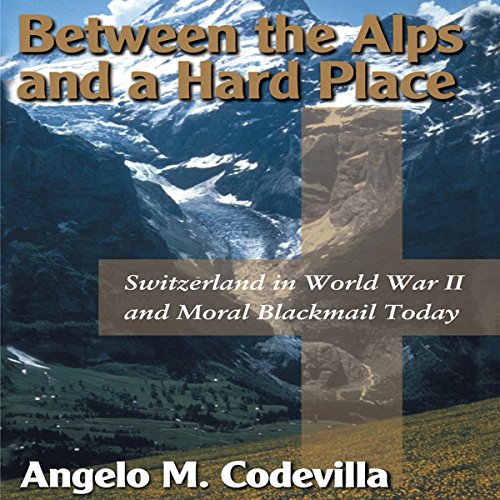 Between the Alps and a Hard Place

Between the Alps and a Hard Place

What really happened to the billions of dollars worth of gold seized by Nazi Germany? What role did the Swiss government play and what are the implications of neutrality during wartime? The author addresses these questions, presents the case for and against Switzerland, and applies the lessons learned from World War II to the broader issue of companies - and countries - profiting during wartime.

Between the Alps and a Hard Place is both thrilling World War II history and an exposé of the shameful selling of historical truth and American foreign policy for political gain.

What listeners say about Between the Alps and a Hard Place

Pity about the narration and editing

What disappointed you about Between the Alps and a Hard Place?

The narration was poor, conveyed a lack of interest and did not do justice at all to the content of the writing. The editing was woeful, partial sentences were regularly repeated.

The story and history were fascinating and there were many revealing accounts included in the writing. The perspective might have been a little biased but no more so than the diametrically biased but popularly held opinions on the subject.

Unfortunately I have had to stop listening to this part way through.

It is nothing to do with the text (which seems quite good). It is the narration. The narrator talks so fast it is difficult, I would even say uncomfortable, to listen to it. She absolutely "gallops" through it, hardly taking a breath, and gives no time to take in and absorb one sentence/concept before she is "rattling through" the next. A little punctuation would not go amiss!

I appreciate that it might not be the way the narrator did it, it might be down to editing etc., but it is almost as though she is racing against the clock or is on some sort of time performance target!

This is not a review of the book, as I was unable to get far into the book.

The narration is absolutely awful. It was done by a real woman, but has the sound and flow of a robotic synthesized voice.

I have listened to hundreds of audiobooks and this bar far is the worst narrated one of them all.

It was like someone just took the text and put it through one of those voice-synthesizer programs.

If you enjoy poorly edited and overwrought political screeds about modern politics, this book is probably for you. But if you're interested in finding out more about the history of Switzerland during World War II, keep looking.