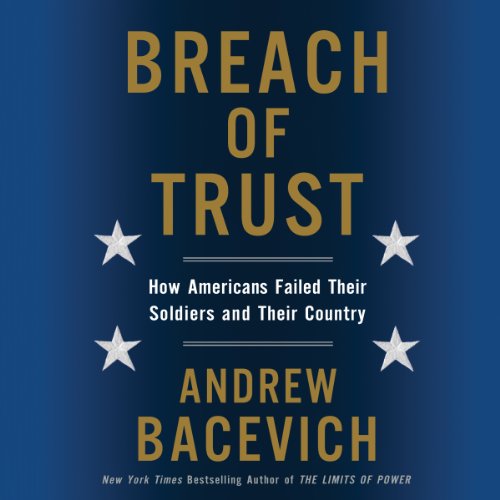 How Americans Failed Their Soldiers and Their Country
By: Andrew Bacevich
Narrated by: Sean Runnette
Length: 7 hrs and 6 mins
Categories: History, American
5 out of 5 stars 5.0 (1 rating)

A blistering critique of the gulf between America’s soldiers and the society that sends them off to war, from the best-selling author of The Limits of Power and Washington Rules.

The United States has been "at war" for more than a decade. Yet as war has become normalized, a yawning gap has opened between America’s soldiers and the society in whose name they fight. For ordinary citizens, as former secretary of defense Robert Gates has acknowledged, armed conflict has become an "abstraction" and military service "something for other people to do".

In Breach of Trust, best-selling author Andrew Bacevich takes stock of the separation between Americans and their military, tracing its origins to the Vietnam era and exploring its pernicious implications: a nation with an abiding appetite for war waged at enormous expense by a standing army demonstrably unable to achieve victory. Among the collateral casualties are values once considered central to democratic practice, including the principle that responsibility for defending the country should rest with its citizens.

Citing figures as diverse as the martyr-theologian Dietrich Bonhoeffer and the marine-turned-anti-warrior Smedley Butler, Breach of Trust summons Americans to restore that principle. Rather than something for "other people" to do, national defense should become the business of "we the people". Should Americans refuse to shoulder this responsibility, Bacevich warns, the prospect of endless war, waged by a "foreign legion" of professionals and contractor-mercenaries, beckons. So too does bankruptcy - moral as well as fiscal.

Andrew Bacevich follows up on the threads he started with 'The Limits of Power' and 'Washington Rules'. In this book he explores how the post-Vietnam transformation of the military from a citizen-soldier force to an all-volunteer force has come with many unintended (but not necessarily unseen) costs. Not the least of which is the expansion of long almost perpetual wars and a limited exposure of the real cost of wars to either the politicians or general population of our country.

The last letter I received from my older brother (an Army helicopter pilot who served twice in Iraq and twice in Afghanistan) dealt with the idea of reconstituting the draft. While Bacevich doesn't actually recommend the draft, he does think a conversation about national service and the draft would be useful. We have reached a point where our nation's imperial impulses have grown dangerous, while at the same time, we have relegated the cost to either future generations (the lat two major wars were all fought with debt) and a small cadre of professional warriors (less than 1% of our nation's population). If we have no skin (financial or physical) in the game, we are more likely to allow our leaders to continue to push us into perpetual war.

Do You 'Support The Troops'? Really?

I've long admired Bacevich since I read his The Limits of Power: The End of American Exceptionalism. Politically speaking, we are almost at opposite poles, but perhaps they are opposite poles of an honest, ethical conversation. Bacevich is a West Point graduate, has been a serving officer and holds a PhD in American Diplomatic History from Princeton University. He lost his son in 2008 in Iraq.

Breach of Trust takes a very thorough and deeply critical look at the evolution of America's professional (as opposed to a conscripted) military. From its inception after the Vietnam war to the present, he examines who has benefited from its evolution, how it has shaped the rise of the industrial military complex, fed and grown a voracious bureaucracy and enabled disastrous foreign policies and defense strategies.

The book takes acidic aim at a population that pays only superficial lip-service to 'honoring' those who serve, while demanding the right to sacrifice nothing and continuing to consume with relish while lives are wasted on foreign adventurism that is not only unsuccessful, but does little if nothing to ensure the security of the US.

It is essential reading for any American who truly cares about their culture, their democracy and principles of fairness. Its implications stretch far beyond the constitution of a military and address questions of what it means to be a citizen - its benefits and its responsibilities.

By necessity it covers certain parts of history in depth in order to build the author's arguments. When he offers examples to illustrate his point, he doesn't settle at one - he lists many - and because of this, there is a certain tone of academic writing to the text. This does make for dense, but it is all the more rewarding and persuasive for it.

I thoroughly enjoyed this book but, I must admit, I already new much of the history he points out. I was a little surprised he did not go into more detail about how the American public has forgotten about the military while, at the same time, use the military as political fodder. Perhaps it is because the general public does not want to be actively involved in any form so the bumper sticker is enough to satisfy their collective conscience.

This book puts into words how and why the US military and its actions are today different than in the past. It's an uncomfortable read because the author - rightly so - puts the blame on the disengaged American public.

A Disturbing and Important Book

What was one of the most memorable moments of Breach of Trust?

The entire book is reflective of a congressional military industrial complex run amock. The entire book is an accurate reflection of what any thinking and republic loving military member is haunted by; continuous war without public commitment or risk. This book lays it out very plainly the reasons underlying the separation of the American People from their military and the great risk that the US Military is taking by willingly participating in expeditionary war without the expectation of Congressional debate and consent.

This book just makes you sad. It makes you realize that the American People have been duped by their leadership into thinking that their way of life is cheap and costless. In the process it has allowed America to become soft. It has allowed Americans to think that Trigger Warnings and avoidance of the harsh realities of life will protect them from life and allow them to maintain an indefinite state of corpulent narcotization to the realities upon us.

The US Military can be both professional and citizen but there is little desire or pressure to do this in a system that promises discipline and separation from the "sheep" of the world. The US Military is divorced from the society it is meant to protect. Vast urban military centers like Norfolk and San Diego allow the US military to think that it understands the American people because their "communities" are ostensibly civilian. Unfortunately the maintenance of a vast active duty military centered on defense oriented cities only serves to further isolate and insulate the military and the American people from one another.

The system is broken and needs to return to one in which every community has an armory and every community watches its members go to active reserve duty. Americans need to feel the sting of the loss of members when they deploy so that Americans will engage their leadership to debate the need for deployment. The US Military was never meant to be nor can it be allowed to become a Praetorian Guard for the whims of the executive and unless Congress starts stepping up and demanding it's right to make the decision to deploy US forces after debate and consideration, the American People will one day find itself saddled with a mercenary force devoted only to those who hold the reigns of power.

Bacevich has made a name for himself as the "10th man"; the individual willing to stand up and say that the system is broken and failing badly. AS a USMA graduate and Army Officer he fully understands the implications of a professional standing army and the risks we face by having such a thing. His words are not pleasant to read but they are real and true. Every American should be forced to read this book and listen to his words.

More importantly, every US Congressman and woman should be forced to be briefed by Bacevich and reminded of their responsibilities to their constituents, the Constitution and ultimately the American Warrior Class. Allow the system to continue as it is is not protecting or loving America's soldiers...

Every American Must Hear/Read This Book!

If you could sum up Breach of Trust in three words, what would they be?

Andrew Bacevich continues to address, compellingly, America’s ossified and constrained approach to foreign policy and military policy since WWII. He clearly chronicles the errors in thinking and strategic mis-understanding that have caused so many problems, so much needless cost and so many needless deaths with so little productive gain in security. He is a dynamic analyst and is given particular insight given he was a career officer and West Point graduate. It is rare but not singular that a military person can escape the usual military perspective and see the larger picture as he does. He names names instead of making generalized references so we get to see the actors (generals, politicians and others) more closely for who they are and what they did.
Further he identifies officers who, like him took seriously the duty to see the military role as part of the diplomatic and peace seeking function for the nation not just for its own survival and self justification. Many do not realize that West Point teaches, not just military mastery but statesmanship as well (perhaps more directly than other ivy league schools).

The narrator while not bad lacked the necessary dynamic delivery this book needs. His narration was not without inflection but I had a sense that nearly every paragraph was read with the same emphasis, a mistake in my view. I found myself wishing the author were reading it as I’ve head him in interviews and think he would be better.

The known corruption that took place in so many ways in the Iraq war with nothing, nothing ever done about it.

I’d recommend the book to anyone but perhaps to read instead but it’s important enough to listen to in any case.

Must read for every citizen!

Would you consider the audio edition of Breach of Trust to be better than the print version?

Not better than print, but equal to.

Should be mandatory reading for every high school civics class.