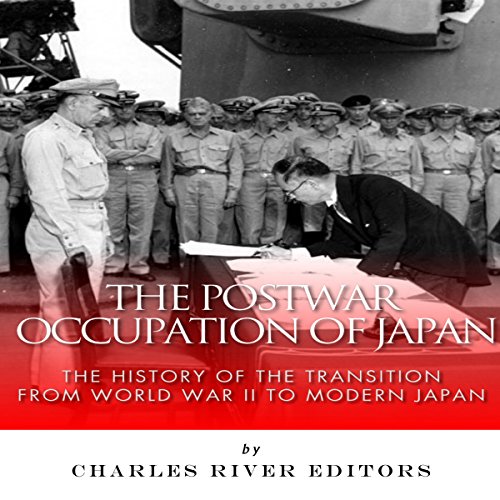 The Postwar Occupation of Japan

By: Charles River Editors
Narrated by: Tim Welch
Try for £0.00

Explains the formation of a new constitution, as well as the democratization and demilitarization processes Includes a bibliography for further reading Includes a table of contents

The American occupation of Japan holds a singular and problematic place in the histories both of Japan and of American foreign policy. For the Japanese, the occupation marked the transition from war to peace, from authoritarianism to democracy, and from privation to plenty, making it a passage from one of the darkest chapters in Japanese history to one of the brightest. Nevertheless, the significance of that passage was fraught with ambiguities; after all, Japan did not win its new democracy through revolution from below in the form of a popular indigenous movement pressing for increased rights and a more open, inclusive politics. Instead, Japanese democracy came as a revolution from above, a system imposed wholesale and virtually without consultation by an occupying army whose Supreme Allied Commander General Douglas MacArthur wielded power as absolute and unchecked as any emperor.

Many critics at the time and since have worried that the political system established by the occupation was thus somehow hollow, a thin veneer of participatory democracy resting uncomfortably atop a deeply conservative and hierarchical culture, symbolized above all by the continuing presence of an emperor. Others have argued that the contradictions of a radical democratic revolution from above are real but irrelevant. Presented for the first time with open space for genuine political speech and action, ordinary Japanese seized the opportunity to exercise agency over the course of their own lives, pulling Japan in directions that neither the old Japanese political elite nor the new American occupation authorities had foreseen.

What listeners say about The Postwar Occupation of Japan

I would not have minded a bit more detail and therefore length, but overall got what I was looking for in a well written and well read document.

What did you love best about The Postwar Occupation of Japan?

The book had its own perspective of the war and the details it explained.

I liked the details in the story and how they described certain things making it easy to understand especially for someone who is learning English as a second language.

I liked how Tim Welch adding emotion in the reading making it easier to feel what the situation was like.

The war in our perspective.

This was a great learning experience for me. The audio allowed me to understand it easier and it was easy to follow along.

Would you consider the audio edition of The Postwar Occupation of Japan to be better than the print version?

Yes I feel that audio edition is a better fit for me, The Postwar Occupation of Japan audio edition oppose to the print version is better because there's more of an understanding of the story and the narrator did a good job grabbing my attention and maintaining a steady pace during the read.

What was one of the most memorable moments of The Postwar Occupation of Japan?

One of the most memorable moment of The Postwar Occupation of Japan was that even after the United States bombed Japan soon after they led the Allies in the occupation and rehabilitation of the Japanese state.

What does Tim Welch bring to the story that you wouldn’t experience if you just read the book?

Tim Welch brought an gravitating force to listen to what could be a less than exciting read he brought a visual to the story and not only grabs your attention but holds it for what was for me one sitting.

I didn't have an extreme reaction but this book it was definitely informative and I learned a lot about the postwar.

Would you consider the audio edition of The Postwar Occupation of Japan to be better than the print version?

Audio edition is better. It really let me follow the history and facts and let me backtrack 30 seconds if i missed something.

What other book might you compare The Postwar Occupation of Japan to and why?

I would compare this book to Postwar Japan as History by Andrew Gordon.

I liked his voice. It was a voice i didn't get tired of hearing. It kept me interested in the book. The voice was perfect for the book, mainly because it was a book on history.

It wasn't a book i wanted to listen in one sitting, but after i started listening to it i decided to hear it all at once, and I thank Tim Welch for that.

I highly recommended people to buy the audio edition for this book. it kept me interested and i know it will for future listeners.