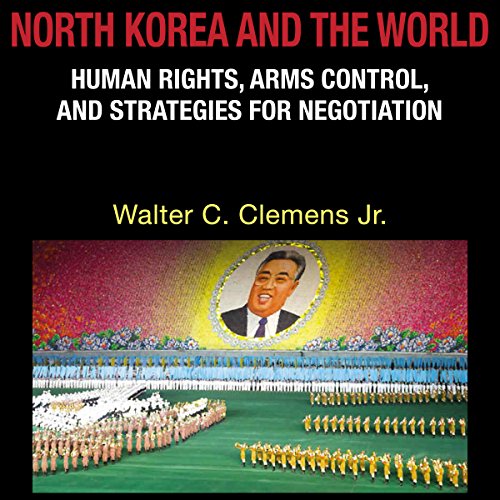 North Korea and the World

With nearly 25 million citizens, a secretive totalitarian dictatorship, and active nuclear and ballistic missile weapons programs, North Korea presents some of the world's most difficult foreign policy challenges. For decades, the United States and its partners have employed multiple strategies in an effort to prevent Pyongyang from acquiring weapons of mass destruction. Washington has moved from the Agreed Framework under President Bill Clinton to George W. Bush's denunciation of the regime as part of the "axis of evil" to a posture of "strategic patience" under Barack Obama. Policy expert Walter C. Clemens Jr. argues that now is the time to reconsider US diplomatic efforts in North Korea.

In North Korea and the World, Clemens poses the question, "Can, should, and must we negotiate with a regime we regard as evil?" Weighing the needs of all the stakeholders - including China, Japan, Russia, and South Korea - he concludes that the answer is yes. After assessing nine other policy options, he makes the case for engagement and negotiation with the regime. Grounded in philosophy and history, this volume offers a fresh road map for negotiators and outlines a grand bargain that balances both ethical and practical security concerns.

The book is published by University Press of Kentucky.

"An important and comprehensive commentary on the present status of North Korea and its relations with the world, and the United States in particular." (Gregory J. Moore, editor of Korean Nuclear Operationality: Regional Security and Nonproliferation)
"A densely researched study that reflects not only the author's previous work on North Korea but also his wide-ranging other scholarship...." (Mel Gurtov, author of Pacific Asia: Prospects for Security and Cooperation in East Asia)

What listeners say about North Korea and the World

This book leaves nothing out in discussing the Korean problem. Beginning with the ancient history of the Korean peninsula and the development of their culture, philosophy and language, it moves through the early history with the Chinese and Japanese Dynansts to the early encounters with the USA. It explains the early Kim Dynasty, the unresolved USA Korean war and the developing nuclear problem. Following the Korean conflict the author discusses each and every negotiation effort in dealing with north Korea's human rights violations and quest for nuclear power. Mr. Clemens wraps up with the status of the Korean problem as of the end of 2015 and presents 10 possible resolutions.

The journey through this history was lengthy but rewarding. I will never think of this situation as a simple problem ever again.

What disappointed you about North Korea and the World?

The book starts out as a pedantic if a little boring history of the Koreas and about 1/2 way though becomes opinion, 3/4 of the way through it slides right into becoming left wing propaganda. I can save you the price of the book by conveying it's main message in one sentence, "it's Bush's fault and the Republicans fault". FYI, I'm a Libertarian.

What could Walter C. Clemens Jr. have done to make this a more enjoyable book for you?

Stick to facts with less editorializing